Kotzen hits his straps with two quick wins as trainer

Winning feature races and, maybe, a glittering overseas career are his goals. 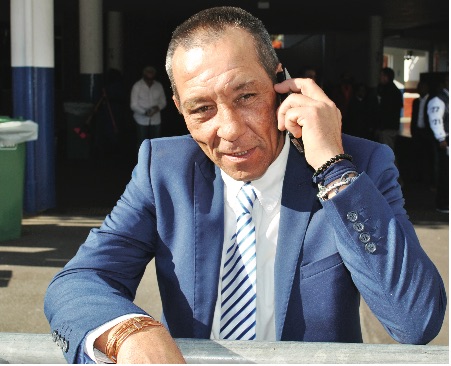 MAKING CONTACT. New trainer Natie Kotzen says he has had fantastic support in his new role.

The start to Natie Kotzen’s career as a trainer in his own right has been much like the man himself, cautiouscand steady.

Kotzen, who turned 50 on 24 August, took the plunge when Mike de Kock closed down his KwaZulu-Natal satellite base.

Kotzen had been De Kock’s KZN assistant for many years following a career that entailed two to three-year stints with all of Mike Azzie, Robbie Sivewright, Colin Lee, Patrick Lunn, the late Michael Roberts and David Payne.

With 12 horses to care for, two owned by his former boss, he stepped out on to the Summerveld training tracks as a trainer in his own right in April. However, he has had very few runners so far.

“My first runner, Just A Moova, broke a hip, so it wasn’t a great start,” Kotzen said, remembering that 23 April disaster. Made of stern stuff, he decided “things could only get better”, but the incident did slow down the momentum somewhat.

“This game is not easy, it takes dedication and hard work. You’ve got to be tough and passionate about horseracing,” he said.

“For quite a while most of my horses were just not ready to run. Every year at around that time, when the babies come in from the sales, we get a lot of viruses. And I’ve still got a few who are not fully recovered. But most of them are coming to hand.”

His patience started paying off towards the end of July when his charges began to show on the race course a smidgeon of what he knew they were capable of and their wellbeing has improved steadily.

Inevitably, given they are trained by a man who has devoted his whole life to horses and learnt his trade at the knees of some of South Africa’s greatest trainers, Kotzen finally had his very first winner 10 days ago.

“His breeder Anton Proctor sent him to me – we trained his dam, Celestial Cloud. Cumulus had been getting better and better in work and his last gallop was very impressive. So I expected him to run well. But I was hoping more for a place than a win. By rights he should need more ground.”

One gets the feeling that now the drought has been broken there could well be a torrent of winners coming from the stable, which has now grown to 24 horses.

Kotzen, called “Masende Sende” (balls) by his grooms – some of whom have been with him since his days with Payne who is now based in Sydney – was born in Johannesburg.

He is from a family entrenched in horseracing.

His dad, Nathan sen, was a jockey and trainer, while his late brother Grant was a successful jockey. Cape trainer Glen is his best-known sibling, while his older brother Darryn is a blacksmith. Their sister Chantell is the only member of the family not involved in horseracing, although she does ride.

Kotzen started out with Azzie as a stable employee aged 17 but when Grant passed away he decided to relocate to Durban “because my family needed me”.

“I enjoyed working for Mike. He was a strict employer but was very fair and good to me,” he said.

One of his most memorable moments with Azzie was Khama’s Pride winning the Oaks.

Other horses he worked with in the years leading up to the halcyon years with De Kock included Sloop (Sivewright), Western Telex (Roberts), Secret Rite (Lunn) and innumerable top runners with Payne, who was champion trainer at the time.

De Kock has had some of the country’s most famous horses pass through his hands in the last two decades, but of all of them, Ipi Tombe winning the Durban July was a highlight for Kotzen.

“When Mike closed his satellite yard my partner Wendy May and I didn’t want to leave Natal, so I decided to open my own stables,” he said.

It certainly highlights the respect his former boss has for him if he is willing to send him horses!

His loyal grooms are not the only members of his team who have his back.

John Buckler, also an ex-assistant to De Kock, is registered as a stable employee, although he is filling in for Robert Fayd’Herbe who is on leave this month.

Kotzen’s father Natie sen is an unoffcial but welcome addition to the team. And jockey Anthony Delpech – “we go way back” – pops in to ride work.

The support structure should give him enough time to enjoy his other passion, deep-sea fishing.

He has certainly got a few “ shy stories” to tell with his dry humour.

Like the one about the yellow bellied tuna who nearly got away.

The giant fish gave him a really good fright but it ended up with him needing help because the reel broke.

Kotzen believes his optimal string would be 40 horses and is hoping that in the near future he’ll enjoy a feature win.

“Winning feature races is my first aim,” he said, adding he believes he has the stock, with quite a few promising youngsters in the string.

“But in the end it would be lovely to be where Mike is, campaigning overseas.”