He could open the meeting with a celebration because Mambo Tango could finally get his first win on the board. 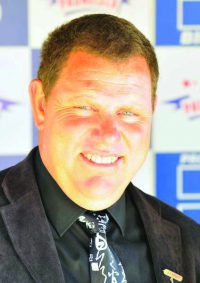 ALAN GREEFF looks set for a big day at Fairview this afternoon.

Trainer Alan Greeff looks the trainer to follow at Fairview on Friday when racing will be held on the Polytrack.

He has strong chances in a number of races and could drive home with at least four winner’s cheques in his pocket.

He could open the meeting with a celebration because Mambo Tango could finally get his first win on the board in Race 1 over 1400m.

The Mambo In Seattle gelding is a consistent place-getter, having finished in the frame in nine of his 11 career starts, and he has shown he is effective up to 1600m, with his last run yielding a 1.35-length third behind Seattle Dragon over that distance.

Swordofthespirit was sixth with Big Three and Lumiere Verto further back.

Others to consider are Big Three, Irish Brave, One Man Band, who will improve on a fair debut, and Ricketee.

Race 2 is a FM 60 Handicap over 1200m and Greeff-trained Stopthinkingofme could follow up on her win over 1000m last time out. That was her first run since relocating from the Western Cape and she has obviously relished her new environment.

She will be ridden by Teaque Gold, with Domeyer on stablemate Pina, so punters should not ignore the hint. However, Stopthinkingofme will start at nice Eachway odds.

Silva Key, Meritocracy and Mock Mambo are others who could fight out the finish.

With four places from five career starts Greeff’s Burning Mist looks the right one in Race 3 over 1200m and the Trippi filly is the stable elect with Domeyer in the saddle.

She had no answer to the finishing kick of Boxley last time out, finishing second, but the form of her previous three races was franked and she looks overdue her maiden win.

Gypsy Jazz makes her debut for Greeff but is likely to improve on a poor effort in her only run to date, but it might be worth including a few in exotic bets.

Another possible Greeff winner is five-year-old mare Coastal Spell, who has also been holding form without winning. Her merit rating has gone up two points but she seems competitive at around this mark and could finally reward Greeff with her first win since relocating from Durban last year.

Biggest danger looks to be Wicked Lady Jane, who is bidding to win her third race in a row but is probably better over slightly shorter.