Jockey Muzi Yeni gives his thoughts on Saturday’s Peermont Emperors Palace Charity Mile meeting with tips for each race as well as his Pick 6 and Place Accumulator suggestions. 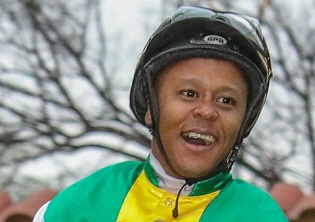 I have wonderful memories of last year’s Peermont Emperors Palace Charity Mile having won the race in a breath-taking finish on my favourite horse, Coral Fever.

The event is the highlight of an extremely enjoyable and festive day of racing and I must compliment Phumelela and the sponsors for this wonderful concept where charities are the big winners on the day.

We return to the Standside track at Turffontein today where, for the first time, a gigantic 13-race card has been scheduled

The Charity Mile is an open affair and if memory serves me right, favourites don’t have a good record so we could be in for an upset. All this exciting action is backed up by the expected Pick 6 MEGAPOOL of R10-million as well as two Jackpots and BiPots.

I have secured the ride on Mike de Kock-trained Noble Secret, better known for his staying prowess nowadays, as he prepares for a tilt at the Summer Cup later this month. However, he has shown quality in his career and has put up some exceptional work back home recently and could be a “dark horse”. Interestingly, he is unbeaten in two efforts on soft ground.

With regards to his poor draw, he has an explosive burst and I was also drawn badly on Coral Fever so I’m quietly optimistic of a decent effort. My first selection, though, is for Candice Dawson-trained Infamous Fox. He has had a great preparation and reunites with his favourite jockey, MJ Byleveld.

Divine Odyssey beat the top selection by just over one length when they placed behind Approach Control recently and he is better off at the weights with both rivals so he’s a huge contender jumping out of gate No 1. Approach Control is under sufferance but is highly rated and could make the step up in grade.

Sean Tarry saddles favourite Zillzaal, who made a winning return as a gelding recently when easily beating a blinkered Approach Control. He has always shown tons of ability but is certainly most effective over further. With that in mind, the Summer Cup is his mission and I’ve never known his trainer to get them 100% ready a race before the major one.

Of the balance, Barahin should progress after his seasonal debut as he also continues his prep into the Summer Cup.

KZN raiders haven’t done badly so it could pay to include lightly weighted Tristful along with Camphoratus, a Grade 1 winner over the course and distance this year.

Race 1 is a Maiden Plate over 1160m where first-timers hold the key so watch the betting on Prince Evlanoff, Bergerac and French Navy’s brother, Corvette Captain. The pick of the raced runners is Storm Commander. Precious Stone finished behind him and has won since.

Race 2 is a Maiden Plate over 1160m where Alameery stands out on form but returns after a 14-week break during which he was gelded. There’s been money for first-timer Mohican along Encore, a half-sister to Pomodoro. Jackpot Jewel and Titelist are best of the balance.

My day begins in Race 3 where I partner Varquera who has been running well. She takes on some potentially decent youngsters but her experience will stand her in good stead. My eyes were on Bella Rosa when she produced a brilliant late burst on debut and 1600m on the Standside track will be ideal.

Fireworks will love the extra ground. Trapiche should build on her pleasing debut and Peaceontherocks is bred for this distance and further.

I’m strong on Bella Rosa who is my PA banker.

Watch the progress of Storm Commander in Race 1 because he was behind fast-finishing Hellofaride who also made a cracking sprint debut recently. He is drawn best in Race 4 and will love this 1600m.

Tunneloflove will be much better without blinkers while Imperious Duke should make improvement. Ideal Day should have beaten subsequent winner African Rock last time but worryingly, hasn’t been seen for 14 weeks since. Jungle Book is highly thought of and merits inclusion. My ride, Star Effect, wasn’t beaten far on his debut and can improve.

Banker Hellofaride in the PA and include Jungle Book, Tunneloflove and Imperious Duke in the Pick 6.

There are some high-quality horses in Race 5, the Starling Stakes over 1400m, including my ride, Snow Palace, who placed in a Grade 1 last season, she needed her comeback run and loves this trip. That said, Mill Queen is the standout on ratings and based on her juvenile form, with the only concern being her fitness on her seasonal debut. She’s drawn in pole.

My roughie in the race is Kayla’s Champ who is back on home soil. Cockney Pride had an awesome comeback run and deserves respect. Golden Belle is talented and places her unbeaten record on the line, though she rises sharply in class.

Go strong on Mill Queen but include Snow Palace, Cockney Pride, Kayla’s Champ and Golden Belle in the Pick 6.

Race 6 is the Ready To Run Cup over 1400m and fillies have a solid record in this event. So Gaian Glory is my firm first pick ahead of Bohica, sadly drawn widest of all, Seemyvision  (roughie) and Spiritofthegroove. My ride, Annatjie, has a tough task but can earn a stake as they pay up to 10th place.

Go strong on Gaian Glory and add the other three into the Pick 6.

Trainer Sean Tarry holds the aces in Race 8, the Graham Beck Stakes over 1400m and the weight turnaround favours Putontheredlight ahead of stablemate Eden Roc. Tallinn is a top-class filly who gets thrown into the deep end but she has a low weight. My mount, Steak And Ale, should have finished closer to her last time and will be particularly effective on this galloping track.

Have an each way bet on Putontheredlight and include Eden Roc, Tallinn and Steak And Ale into the Pick 6.

Race 9, the Yellowwood Handicap over 1800m, is a competitive event and I really like the look of Queen Supreme who gets my vote ahead Bize, Insignis and Second Request.

I ride the second choice for the Mike and Adam Azzie yard, Flying Fable, who on her day, could cause an upset.

Take Queen Supreme for the win, include Bize in the PA and P6.

Race 10 is the Golden Loom Handicap over 1000m and my ride, William The Silent, is a top horse who has recovered well from his setback. He beat Van Halen comfortably on debut and also beat Cirillo in the Nursery. I am a bit worried that he may need the run, his last effort was in this race a year ago but I still expect a strong performance.

Defending champion Rivarine has had a great preparation and reunites with Gavin Lerena. Others to include are Attenborough, Angel’s Power, Rebel’s Champ, Quinlan, Down To Zero and Mythical Bolt.

In Race 11, a FM 92 Handicap over 1400m, I expect an improved performance from my ride, Abelie, who was a bit disappointing last time. Cordillera is my narrow first preference ahead of Abelie, Rockin Russian and Gimme Hope Johanna.

My ‘dark horse’ for Race 12 over 2400m is American Indian but my ride, Dromedaris, stays all day and has been ultra-consistent. He is 2kg better off with Dawn Assault for a 1.75-length defeat. I was super-impressed with Flichity By Farr’s comeback run under a huge weight and her SA Oaks run on this track brings her into contention.

In Race 13 over 2000m my ride, Viscountess Vivien, has been crying out for this distance and is a worthy inclusion, although top weight is a slight reservation. Always Red deserves her next victory and I make her the one to beat ahead of Ballet Shoes, Animal Lover and Jive Express. Watch for improvement from Indian Song who tries this distance, and Pomander, who thrashed older rivals as a juvenile late last season but hasn’t been out since.