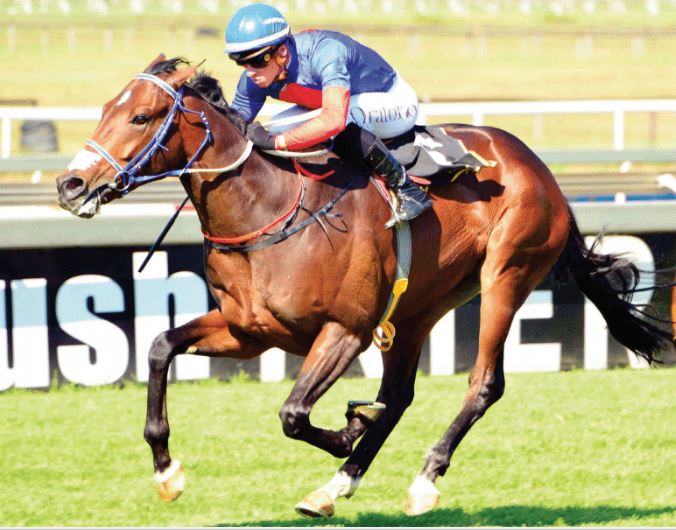 SHARPENING UP. Eden Roc appears to be working towards the Gauteng Guineas and could show a return towards his best form in Race 5 at the Vaal tomorrow. Picture: JC Photographics

Eden Roc is back on the Highveld after his unsuccessful tilt at the Grade 1 Cape Guineas and in all likelihood trainer Sean Tarry will be sharpening up this son of Var for the Grade 2 Gauteng Guineas over 1600m at Turffontein on Saturday 8 February.

This three-year-old winner of the Grade 1 Gold Medallion at Scottsville as a juvenile has yet to have some success since turning three but it seems just a ma er of time before he starts to regain his best form.

He will be looking to find a little more of that juvenile form when he lines up in Race 5, a Progress Plate over 1200m at the Vaal tomorrow. Interestingly, despite not running in the first three in his four races as a three-year-old, Eden Roc has been no further back than five lengths and that was in the Grade 2 Dingaans which was won by stable companion Shango.

He won the Gold Medallion over 1200m so the distance should not be a concern and he will have Gavin Lerena up.

He is not the best-handicapped runner and as so o en happens, that honour goes to a filly – in this case, Isle De France. Mike de Kock’s charge has a 1.5kg advantage based on merit rating but there is 3kg back to the third best-handicapped horse, Carbon Atom. Isle De France is a four-year-old filly and like Eden Roc, is also by Var.

She won her maiden with ease but then failed in both the 2018 Starling Stakes and Fillies Mile. Something went awry and she was out of action for a year before coming back in November last year in a Graduation Plate in which she finished a nine-length seventh behind talented Ikigai.

She took a walk in the be ing which indicated she would need the run and she still could need another. She gets 9kg from Eden Roc but he should still have the edge.

Callan Murray rides. Race 6 is a Pinnacle Stakes over 1200m and once again it is a mare who is the best-handicapped runner and once again, she is not the top selection.

Schippers comes out with a 2kg weight advantage over Matador Man and Mighty High with Van Halen a further 0.5kg behind them. However, it is Mr Flood who looks the runner to beat and he – on paper – is 3.5kg under sufferance with Schippers.

This four-year-old gelding won three of his first five starts, easily accounting for SA Merchants winner Mardi Gras in an Assessment Plate. Lucky Houdalakis’ charge was off for more than a year but this son of Pathfork made a winning comeback in December, beating Winter Storm by 0.75 lengths.

As long as he suffers no ill-effects in his second run after a layoff, Mr Flood looks set to notch up his fifth victory.