Gorkhan Terzi’s charge has failed only twice and that has been when he has tried further than sprint distances. 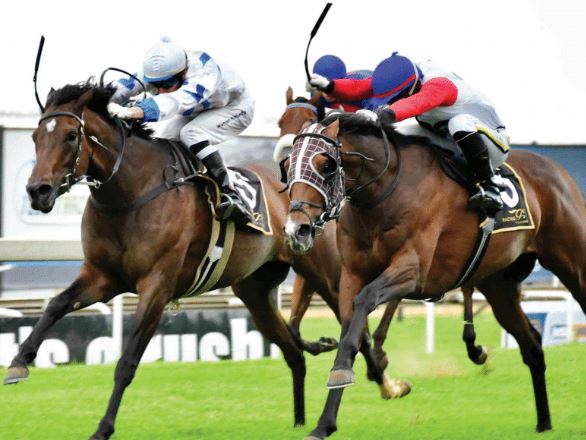 THREE IN A ROW. Jet Start, left, goes for her hat-trick in Race 6 at the Vaal tomorrow and appears to have a much easier task this time. Picture: JC Photographics

Jet Start makes a drop in class tomorrow when she lines up for Race 6 at the Vaal and could notch up her third successive win.

Last time the Paul Peter- trained five-year-old mare got up just short of the line to win the Grade 3 London News Stakes over 1800m at Turffontein, beating Green Haze by a neck.

In that race Jet Start took on far stronger opposition than she will meet in this Pinnacles Stakes for fillies and mares, also over 1800m. In the London News Stakes, she took on the colts, including fourth-placed Al Mutawakel who had previously finished fourth in the Grade 1 Summer Cup.

In this event she will be up against her own sex and will just have to repeat her last performance to win this event. Warren Kennedy rode her in the London News Stakes and is back aboard tomorrow and based on that last race, she looks to be the best banker on the day on what is a tricky card.

Based on merit ratings, Jet Start is the second-best handicapped runner behind Return Flight, winner of last year’s Wilgerbosdri SA Fillies Classic over 1800m and the Grade 2 SA Oaks over 2450m, both at Turffontein.

However, Return Flight also contested the London News Stakes and finished last in the six-horse race. So based on that run, Return Flight will need to show some improvement to reverse that result, especially as she is only 0.5kg better off .

That said, Return Flight is no slouch and could well make the necessary improvement. Denis Schwarz takes the ride for the first time. Flichity By Farr has to be considered a major threat to both of them because she showed improvement last time when fitted with blinkers to beat Sea le Force by 0.20 lengths in a MR 104 Handicap over 2000m.

She will once again have the services of Gavin Lerena. Oden won his first start in South Africa impressively after having had four victories from five runs in Zimbabwe.

Gorkhan Terzi’s charge has failed only twice and that has been when he has tried further than sprint distances. He ran unplaced at Borrowdale in his second start when raced over 1600m and last time, when tried over 1475m in the Grand Heritage consolation race. He lines up in Race 5, a MR 88 Handicap over 1100m and this could be right up his street.

Diego de Gouveia picks up the ride. The dangers could come from Battle Creek and Illusion. Battle Creek, trained by Dorrie Sham, has been taking on stronger company while Illusion, from the potent Paul Peter yard with unstoppable Warren Kennedy in the irons, has yet to show his true ability and is probably be er than his current form indicates.