Clearly not as good as his father, the legendary Dynasty, but the Dean Kannemeyer-trained Dynastic is starting to realise his potential and still looks value off his current merit rating and there should be more wins in this three-year-old colt. 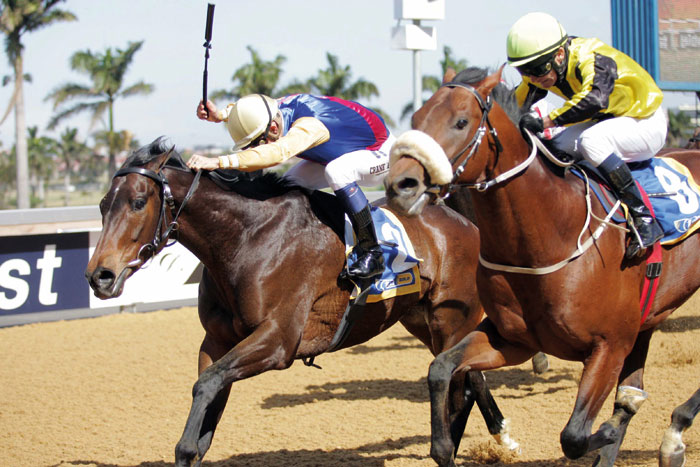 Dynastic (right) can continue the legacy of his father, Dynasty, when he contests Race 7 over 1600m at Scottsville today.

Following visiting trainers, particularly from the Western Cape has been the way to go and it is an easy choice to be with Dynastic in Race 7, a MR 86 Handicap over 1600m at Scottsville today.

The Anthony Delpech-ridden Dynastic has won twice in his six starts to date but was also narrowly beaten on three occasions.

His only unplaced run came at Kenilworth in December when pulling up not striding out.

The Kannemeyer yard seems to have ironed out that problem and he has looked good since returning from a break.

Tried on the Polytrack in April over 1400m Dynastic looked unlucky not to catch Mackdesi and was beaten a neck.

A change of tactics back on the turf in his latest saw jockey Delpech hitting the front early and winning easily.

It is his first time at this track but that should not really be a problem from pole position draw.

The dangers if any could come from Always Al, King Jace or Dancingwithjackson.

It has been a long time since Always Al last won but this front-runner could keep going one of these days and he does like this course.

King Jace was only 3.30 lengths behind Futura last time and that looks good on paper but the truth of the matter is that race was run at a ridiculously slow pace and time and a blanket covered the field.

The five-year-old could earn minor money.

Dancingwithjackson receives 11.5 kg from his fellow three-year-old and could make him competitive as you can totally ignore his last run. Earlier on the card in Race 2 the Mike de Kock-trained Gain Ground indicated first time out he won’t be long in winning a race.