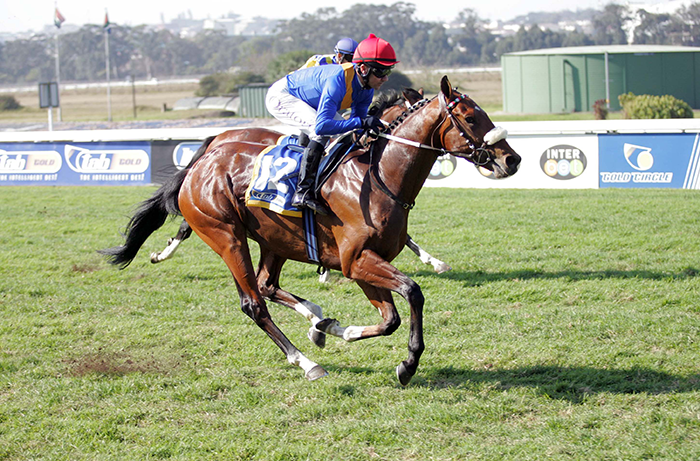 CHANCE TO WIN. ML Jet has been most disappointing but he gets an ideal chance to get back on a winning track in Race 8 at Turffontein today. Picture: Supplied

There is some wonderful racing at Turffontein today when some top-class horses will be in action. The only problem is that many of them have been out of action for months and their level of fitness in unknown.

Topping the card is Race 8, a Graduation Plate over 1600m on the inside track and it looked a most competitive event. Trainer Weiho Marwing entered Rampant Ice and Mac De Lago, who finished fourth and fifth respectively behind French Navy in the Grade 1 Daily News 2000 but both have been withdrawn.

They were the best handicapped runners but now that position is held jointly by ML Jet and Anjaal. Anjaal, from the Mike de Kock yard, has been disappointing and it is important to note that in his last two races he pulled up short.

If that problem has been sorted out the Australian-bred son of Lonhro has to be a runner. Anthony Delpech will be at Turffontein to ride him and he has to have a decent chance.

So that leaves ML Jet – the horses who was all the rage as a two-year-old after winning his first two starts but who has gone ever backwards. He was gelded in January but that also did not seem to make much difference and in April he joined the Gavin van Zyl yard.

There was some improvement which he demonstrated when finishing third behind Easy Lover in the in the same race contested by Rampant Ice. He finished 1.40 lengths in front of the Marwing-trained runner but is now 1.5kg worse off and that means there is little to choose between the pair.

The one advantage ML Jet has over his opponents is that he is racing fit. His last start has on 6 September at Scottsville where he faced Same Jurisdiction in a Pinnacle Stakes. Delpech rode him on that occasion and allowed his mount to stride to the front. He proved no match for Duncan Howells’ brilliant filly who ran away from her opposition to beat De Kock by 2.75 lengths with ML Jet another neck away in third.

That was a decent enough run and perhaps those who have decided the four-year-old son of Jet Master is a “milker” who they have decided to rather watch from the stands than to waste another cent on the fellow, will find it in their hearts to give him one more chance.