Horses either grab you or they don’t – and in Michael George Azzie’s case, a love of the majestic and silky coated animals is embedded in his DNA. 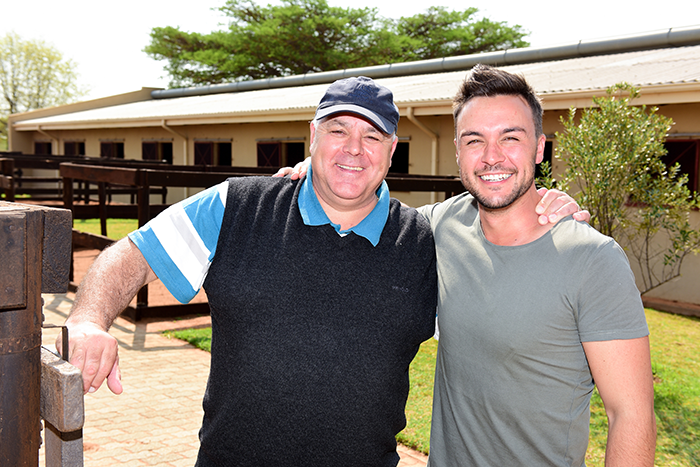 Azzie, 57, is part of an ongoing legacy in South African horseracing. His grandfather George is still considered legendary by horseracing fans, having handled the careers of iconic horses such as multiple Grade 1 winners Hawaii and Elevation, as well as Davy Jones, who won the Charity Mile (then the November Handicap).

His father, Herbie, was also a talented trainer. Azzie took over in 1981 when his grandfather and father died within six weeks of each other, making a success of his chosen profession with a lot of support from his wife, Sharon. He is in the process of handing the mantle down to a fourth generation: two of his sons, Adam and Ryan.

He believes they could become a formidable team with their different, but complimentary, interests and personalities. “I’m blessed to wake up every morning to do something I’m passionate about with people I’m passionate about,” said the man who knew from an early age (“like four or five”, he says) he would train racehorses – just like his granddad and dad.

And down the years he has been rewarded with some top athletes – best of whom he says was National Currency, a horse who “cleaned up” in South Africa and gave him a passport to explore international horizons in Hong Kong and Dubai for a short time.

In the early days, racing fans could count on fireworks with Azzie, an emotional man never scared to show his feelings or give an opinion, but in recent years he has become more reserved in his outbursts.

That’s not to say he does not still celebrate joyfully whenever one of his beloved horses wins. “I’m older and wiser now. I’ve learnt to suck it up, come back and fight another day,” said the man who has often been in poor health down the years.

“When things go against you, you can’t change what happened. I still do go on about things, but not as vehemently – it’s a waste of time.

“What I do hope is that when I retire or die, I want people to say: ‘That guy was good for the game’.”

For my money that’s not even in doubt: he will get his wish. He believes the Peermont Emperors Palace Charity Mile, which will be run at Turffontein today, is one of the social responsibility events that will help South African horseracing survive.

“It’s a great concept,” he said. “It reminds all of us in the industry that many people have so much less than what we take for granted every day. It’s a big deal – but racing has always made the effort to try and help people in need.”

The 16 charities will each take home a share of R1 million, with the finishing positions of the horses in the race determining how much each gets. Azzie will saddle Deputy Jud, winner of the SAP Supreme Cup last month and second favourite for this competitive R1-million handicap. SuperSport presenter Neil Andrews will be the public face of Deputy Jud, who runs for the Welamlambo Primary Aftercare Centre. The trainer openly adores his 150- odd horses but Deputy Jud is one of the special ones. “He can be a bit of a monster,” Azzie admits.

“He likes to nip and show he’s the boss, but he’s extremely intelligent. He seems to listen and understand. Every day I tell him he’s a champ and he softens while I speak to him.”

He believes Deputy Jud can do well in the Charity Mile, even though his main mission is the Sansui Summer Cup next month. “He’s in good shape. He’s a fit horse and has had an ideal preparation. It’s all on track,” Azzie says.

He is a little concerned about Deputy Jud’s draw but says: “If the three reserve runners come out he’ll jump from the No 10 stall, which is not the worst.”