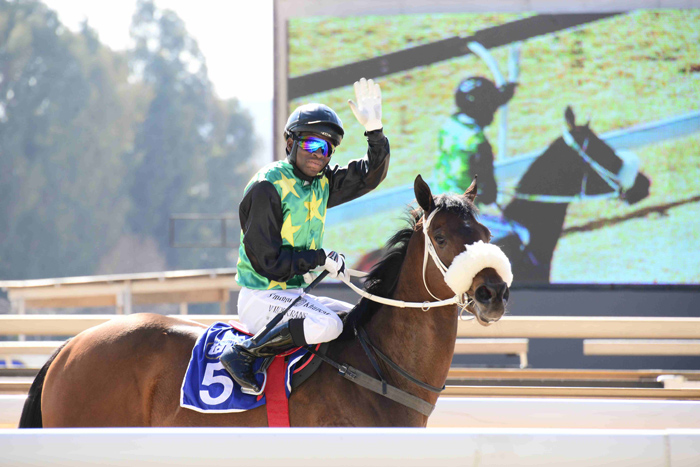 The popular Racing. It’s A Rush International Jockeys’ Challenge takes place this weekend at Fairview today and Turffontein tomorrow and Robert Havlin, riding for the internationals, could draw first blood in Leg 1 with his mount Pipette in Race 5.

There we will be four Challenge races on each raceday in which six South African riders, led by Gavin Lerena, will take on a group of international riders, captained by Hayley Turner. All the races are be handicaps and open-looking contests, so theoretically either team can win.

Pipette should be best of the five runners from the Yvette Bremner stable in the first Challenge race at Fairview.

This Judpot mare picked up a six-point penalty for her last win but that might not be enough to stop her because she was an easy two-length winner over High Fashion in a 1200m race last month.

The drop to 1000m will be no problem as the five-year-old races handily and has a turn of speed.

Cape Flyaway was expected to do much better than she did when well beaten by Pipette last time out but she clearly has her problems and that run is best ignored. This shorter trip is sure to suit the three-year-old filly and Pat Cosgrave could score more early points for the internationals.

The second Challenge race looks a close affair. Zander and Thayer have decent chances for the locals, although Fashion Scout and National King are not without winning claims.

The remaining two Challenge races at Fairview will be run on the Polytrack and inside draws are usually best so there is sure to be some major jockeying for position before they enter the home straight.

In the first, Briar King is best drawn but tends to be slowly out the pens so may battle to make use of his draw.

The South African team has drawn well, with Mambo Italiano and D’vash, and both horses have to be considered but this does look the most open of all the Challenge races. Turnstone, Oreo, Rebel House, Richard Strauss and Dogmatism all hold winning chances.

The four with the best form in the final race, Soleil Royal, On My Wits Alone, Jay Radical and Red Scimitar, all have deep draws to overcome. This might allow King Of The Castle to go off on one of his start-to-finish missions.

Simmering and Emblem Honour are two others to consider. What an end to Day 1 of the competition!