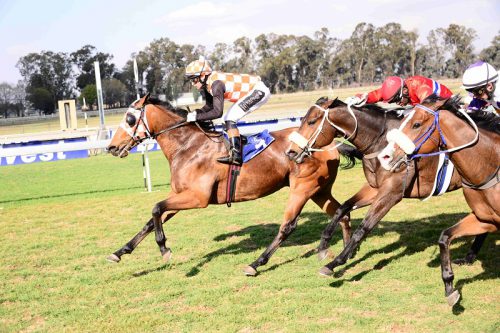 At the time of writing, today’s Turffontein meeting was going still going ahead. Irrespective of the weather, the one thing we are certain of is that the going will be soft and that it will benefit certain horses.

There has been heavy rain, enough to cancel Thursday night’s meeting, and the same could happen today. Yesterday afternoon the news was that more than 52mm of rain had fallen during the week, 24mm of which was in the past 24 hours. The penetrometer reading was 25.

Some horses prefer to run in softer going. Those with soundness issues, for example, find the ground more forgiving as it is not so hard. I would also think you would go for a horse who is super fit because the track becomes more testing so fitness levels must be close to maximum. If a horse is going to struggle to see out 1000m it will naturally battle on the soft. In general people think horses with small feet are at a disadvantage. There is some merit in that argument but it is not a hard and fast rule. Then there are some who are total mudlarks and seem grow another leg in the wet. Think of the old Vaal sand track and those who performed on that surface could improve in the wet.

The Turffontein straight course, in general, does not have a draw bias. But because of the slope from the outside towards to inside the outside is slightly higher and therefore will drain better than the inside. Therefore I would lean towards to outside draws down the straight because the better going will be there.

The other issue could be around the turn where in the back straight, the outside is lower than the inside. So not only do you have a wide draw to overcome but you also have to run uphill to get there. That is obviously a double whammy. It is not all that severe but on the odd occasion it could make the difference between winning and losing.

I was meant to ride Samurai Blade in the Summer Cup but I cannot ride at the allotted weight of 51.5kg and now I have the option between Deo Juvente and The Conglomerate. However, I have to wait for Anton Marcus, who is the stable jockey, to make his pick, and then I will have the other one.

Race 1 is a Maiden Plate and three horses stand out – Seeking Gold, Secret Star and Oroblanco. There are some unraced horses so you need to watch the betting.

Race 2 is a Handicap with a small field. My first choice, based on form is, Front Rank. Last week it looked as if he was going to win and then he stopped. Therefore, with the soft track and extra distance I’m leaning towards Enbharr as my first choice, with the dangers being Chepardo and obviously Front Rank.

I’m riding Hidden Agenda. He has a bit of a bad draw but he is fit so he needs to be included in the exotics.

Race 3 has a Place Accumulator banker in Babbling Brooke. However, she has not raced for two months and with all the rain some of the horses can’t get their full workout as the tracks are under water. For that reason you could also consider Ntoma.

A horse who could improve quite a lot because of a wet track is Featherfoot and she could make the exotics pay.

Race 4 is a competitive maiden field but the horses I’m leaning towards are all lightly raced. Unfortunately it is difficult to banker any particular one but consider Imperial Ounce, Pampierstad and Just Cruised In.

For the PA go with those three and one more of your own choice.

For the Pick 6 you could quite honestly include the field as there are others with chances, including Misty Roller, Pajama Party and Payne’s Grey. This race is so wide open that even a horse like Lee’s Pick has a chance as there have been numerous winners from the two formlines.

Race 5 is a Pinnacle Stakes and your best handicapped horse usually wins. I have the honour of riding the highest rated horse in the country, Talktothestars. The bonus is that this is a sprint and the dangers are all horses who need distance. However, you could see a horse benefiting from the soft track and running on strongly, such as Legal Eagle.

Banker Talktothestars in the PA but for Pick 6 consider Legal Eagle, who is a classy sort, and even horses like Abashiri and Trip To Heaven could come through in the Pick 6.

Race 6 is the Gardenia Stakes and is also a plate race so it favours the highest rated runners. But this is a lot more difficult than the usual plate race. You could lean towards the younger brigade who are Exquisite Touch and Green Pepper. But you should also consider the older runners who are better handicapped. They are Joan Ranger and Kilauea. For the PA consider all four and for the Pick 6 possibly the field.

I ride Kilauea who is having her second run from a rest. She is coming back in distance, which is not always the ideal prep. Hopefully she performs well as I’m also booked to ride her on Summer Cup day.

Race 7 is the Victory Moon Stakes and your best handicapped horse should win. But in this instance I’m leaning towards St Tropez and Bezanova. You could also include Liege and Bankable Teddy. Take all four in the PA.

Others to consider are Judicial, but he is coming off a rest, as well as Master ‘N Commander who is the best handicapped horse in the field. If they are not enough then consider the field.

I ride Coltrane. The distance is too short and he has a shocking draw. I would be over the moon if he ran a place.

Race 8 is another handicap which can be quite tricky as the best horse in the field, The Shredder, is coming off a long rest. So the horse we may all have to beat is Yankee Captain. He has run against stronger, his rating is dropping and he has a good draw. They should be good enough for the PA. They could also be good enough for the Pick 6 but you could include your own fancy,

I ride Golden Man who is drawn No 1 which is a huge advantage over this course and distance. He has not raced against the strongest fields and is not sure to see it out. Because of his good draw, it gives the connections a golden opportunity to see how he fares over the distance.

Race 9 is another handicap and here I’m leaning towards Restless Rogue. He has campaigned against decent competition and his merit rating is coming down. His danger could be Ebony Knight. He won well last time out but it was against maiden company and this time it will be a lot more difficult.

Another horse to consider is Gold Status as he is drawn towards the outside.

I ride Dolphin who was well beaten last time but he didn’t have a good draw. This time we are drawn, in my opinion, on the better side of the track, but unfortunately it is 1160m on a soft track and it remains to be seen if he is effective over this distance.

For the PA and Pick 6 go with the first three mentioned and anything else you may like.