Word is Master Sabina is putting up excellent work at home. 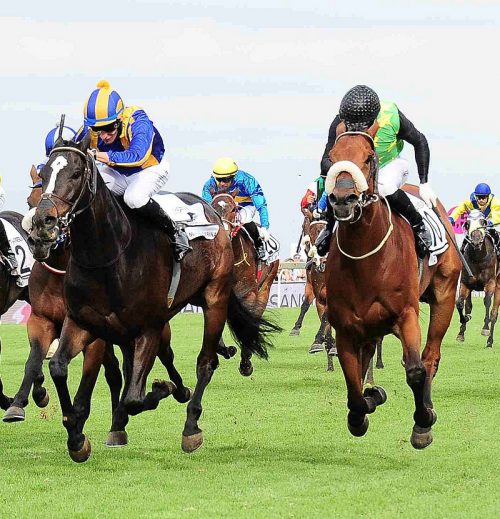 We run the R2-million Gauteng Sansui Summer Cup over 2000m at Turffontein today and fortunately we have had some good rain, which we need for the country and must appreciate. But from a racing perspective, we could have had too much.

For the sake of the horse we want a nice track with a little give in the going, but when we get too much rain often horses can’t get in enough track work which means they might not be 100% fit. That is one factor punters need to look out for and go for runners who are racing fit as a soft or heavy track will make all the races more testing.

From a jockeys’ point of view the track will also deteriorate as the day goes on and we also have to consider our safety.

The Summer Cup is turning out to be an open affair. So many horses have chances and the rain-affected track will make it even more complicated. I suggest you include as many as you can afford in the Pick 6 but for the Place Accumulator I would lean towards Master Sabina, who I understand is working superbly, Deo Juvente, Saratoga Dancer and Ten Gun Salute.

Master Sabina’s got good form, a good draw and he’s working well – all a good recipe for a win. Trainer Geoff Woodruff has dominated this race for the last three years and it would come as no surprise if he wins it again.

Others you could consider for the Pick 6 are Judicial, Juxtapose, Samurai Blade and St Tropez.

I’m riding The Conglomerate who has a bad draw. He’s also held on form by Deo Juvente and as Anton Marcus had first choice between the two rides, Deo Juvente looks the pick of the pair.

Race 1 is a Maiden Plate with the form horses being Furiosa and Tharoos. They’re the only two horses with form and are difficult to separate. There are quite a lot of unraced horses and my suggestion is to follow the betting as I have heard some of them are showing good work.

Race 2 looks a match race between Magicality and Noceur. Magicality has not raced for a couple of months and her fitness could be doubtful. Noceur has only had one run in which she ran third behind French Legend and could improve.

I ride Salmon Run who finished behind Noceur and as my filly was quite forward in that she jumped well and showed pace, I can’t see her beating Noceur who was slow and green.

Twinkle Town could also be a runner if she comes back fit.

Race 3 contains probably THE best bet on the card and that is Green Pepper. She won with something in hand last time and under the race conditions was only allowed to get a 3kg penalty. For that reason she is still well handicapped.

I would make her a Place Accumulator banker but if you want to add another runner include Crystal Glamour. She only finished 2.75 lengths behind Green Pepper and is now 3kg better off. She could also be better over 1160m than her rival but Green Pepper did win easily and probably has her held.

I’m riding Kilauea who was well beaten by Green Pepper last time so I can only hope to run a place.

In Race 4 you could possibly banker Kangaroo Jack. His form is impeccable and he’s been winning with ease. He should be another banker in the PA but if you want some back-up the only other horse to consider is Trip To Heaven. He won well last time and the soft conditions should be right up his alley. They should also be enough for the Pick 6.

I ride Talktothestars who was well beaten by Trip To Heaven and is 2.5kg worse off. The fact is his merit rating is still too high and he will be lucky to place in this field.

Race 5 is a Plate race and once again your highest rated horse should win. In this instance it is Favour’s Pride but I’m not convinced she is a 1600m horse. For that reason I make this a wide-open race.

For the Place Accumulator you have to include Favour’s Pride but back her up with Dame Eleanor, Babbling Brooke and Santiburi. For the Pick 6 consider the field because nothing stands out in this race. The only horse you could leave out is Bonne Vie.

Santiburi is my ride who is having her second run after a layoff. But in her favour she is drawn No 1 and last time the race worked out very badly. She didn’t jump well and got cut off shortly after the jump so I found myself further back than I wanted to be.

If the race works out and she is more racing fit, she is possibly one of my better rides on the day.

Race 6 is the Investec Dingaans and is another quality race with a field of three-year-olds who are still improving but at a different rate.

I’m riding Janoobi for Mike de Kock who has a big hand in this race. He also has Bold Rex, who is the highest rated horse, and Heavenly Blue, who has a big reputation and has attracted betting support. For the PA, even though it was quite competitive, I would lean towards Bold Rex, Heavenly Blue and Doosra.

My ride Janoobi has a good draw, early speed and should have the run of the race. He needs to be included in the Pick 6 along with Jiffy, Aggressive, Singapore Sling and Secret Captain.

Race 8 is the Ipi Tombe Challenge which is also a Plate race where the highest rated horse should come out and win. That honour goes to Flying Ice but she has not run for 3.5 months and her fitness could tell. For that reason I would think Negroamaro is a PA banker and possibly even a Pick 6 banker.

But the concern is that she was beaten by Tahini in her last start and Tahini has been beaten by some other horses in this race and is not well handicapped either. For that reason include Flying Ice, Polyphonic and Tahini in the Pick 6. If your pocket can afford it include, She’s A Dragon, Intergalactic, Sensible Lover and Fort Ember.

I ride Wukkin’ Up who is not handicapped to place and is coming off a rest, which is not in her favour.

Race 9 is over the marathon trip of 3200m and you want a fit horse, especially in these conditions. Taking fitness and form into this race my fancies are Kingmambo’s Legacy, The Elmo Effect and Kinaan. They should be good enough for the PA but for the Pick 6 consider Coltrane, Enaad, Storm Warning, Odd Rob, Coby and Royal Honour.

I’m riding Storm Warning. Unfortunately he had some issues and was well beaten by Coby last time so I’m hoping that’s all been sorted out. I rode Kingmambo’s Legacy last time and if I could have made the weight I would have chosen to ride him in this event.

Race 10 is another competitive race but my first choice is Silver Peg. Even though Hidden Agenda has been withdrawn, if you take away his last run he would have had a definite winning chance. The fact Silver Peg would have been 5kg better off with Hidden Agenda for a 0.80-length defeat, makes him my first selection. His dangers could be Lunar Approach and Front Rank.

I ride Kings Archer who is held on form. But who knows, maybe the soft track conditions will suit him.