Bank on April to hold form at the Vaal

The Lucky Houdalakis-trained filly has won three of her last seven races and placed in the others. 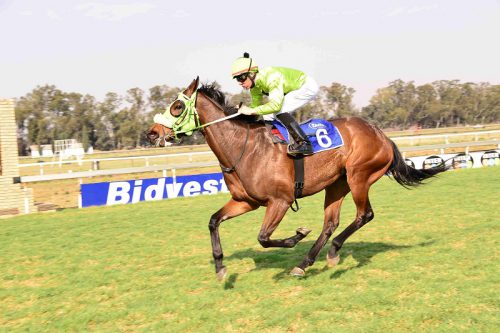 Banking April is in spanking good form and this four-year-old daughter of Dubai Duty Free runner-up Bankable could be the right one in Race 7 over 2000m at the Vaal on Thursday.

The Lucky Houdalakis-trained filly has won three of her last seven races and placed in the others. She was only found out late when trying to make every post a winning one in an 1800m race on the Inside track at Turffontein last month.

She went down 0.80 and a head to Snowdonia and Tiger Flame, who franked the form by winning next time out.

She had reeled off three wins in a row before that, including beating Tiger Flame (gave 1.5kg) by a long head.

Andrew Fortune replaces regular rider Karl Zechner in the irons and looks sure to give Banking April a quieter ride.

Orchid Island, from the stable of Mike de Kock, looked a bit unlucky in her debut, when backed but hampered by a horse behind her clipping her heels. She still managed to finish 0.50 lengths behind Burundi Bush over 1200m on the Vaal Classic track in September.

She recouped losses with an impressive victory from the widest draw over Fish River Canyon (won next time) in a 1600m race on the Turffontein Inside track in October and was then rested.

She rises in class but looks most promising and must come into the picture.

Banking April’s stablemate Cape Marigold can make it a day to remember for Houdalakis by also finishing in the frame.

She was having her second run after a layoff when fading to seventh behind Nother Russia over 1600m at this track this month but is better than that run suggests and could turn the tables on Angelic Appeal and Readyforyourlove, although neither can be ignored in a race with some depth.

That was Readyforyourlove’s second run after a layoff. She likes to gallop freely in front but Randall Simons, who partnered her for the first time that day, will be more circumspect about the pace she sets this time. She could well keep rolling.