Strydom has a massive chance to win Race 10 on Ovidio. 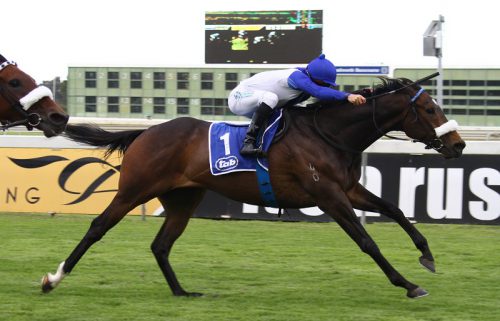 We race at Kenilworth today for what I consider one of the Grand Slams of South African, the R5-million Sun Met celebrated with Mumm, but we also have a number Grade 1 and other supporting features that carry huge prize money.

The stake on the Met was doubled when Sun International announced their sponsorship last year so it is a great prize for anyone to win. It is everyone’s aim to finish in the first 10 as there is money to be won all the way down to that position. At the end of the day the conditions do favour the top-rated horses and to be realistic only three horses can win this on paper – Legal Eagle, Marinaresco and Whisky Baron.

Legal Eagle is top class. He is the best handicapped runner and is an easy horse to ride. He beat Marinaresco soundly in the L’Omarins Queen’s Plate but this time the younger horse

has a better draw compared to his previous runs and this 2000m will also be in his favour. Whisky Baron has improved with gelding and is unbeaten in four starts since. He has beaten It’s My Turn, who is my ride, the last two times very easily and I am now 2kg worse off.

However, last time we lost a shoe and hopefully that did affect him, and the extra distance could also help us get closer. Realistically it will be a tough task to win but we are going to be trying our hardest to earn the biggest cheque we possibly can.

As far as the Place Accumulator is concerned, Legal Eagle looks a banker. For the Pick 6 put in all three, along with the dark horse of the race, Gold Standard. As a three-year-old he has more improvement to come than the balance of the runners.

In Race 1 my first choice is La Favourari as he has been running against top company but don’t write off Cuban Emerald. I rode him last time out but he didn’t jump very well and if the Snaith yard have fixed the little issue I brought up he could make further improvement and even win this. I was hoping to get the ride, but couldn’t.

Race 2 is the Summer Juvenile Stakes and there are a couple of horses who have won their only starts so it’s very difficult to make an assessment. I will to lean towards Dutch Philip who looks to have some ability.

Race 3 is the Kuda Sprint and this is even more difficult as there are 20 juveniles and some have won their only starts as well. The horse I am leaning towards currently, but it’s hard to make an assessment on such a lightly raced horse, is Gold Image, then Wonderwall, Captain My Captain and Barrack Street.

I’m riding Sir Frenchie who is a nice but immature horse who could make further improvement and it wouldn’t surprise me if he manages to beat this field.

For the PA include as many as you can of those mentioned. But the race does not end there are many others with chances.

Race 4 is the $500,000 CTS Sprint and is another 20-horse field which makes it very difficult but as this is a plate race the highest rated horse should win and that is Sergeant Hardy. He’s a nice big talented horse and shows pure class. He could quite easily be a Pick 6 banker and a definite Place Accumulator banker, but for the Pick 6 other to consider are Always In Charge, Cloth Of Cloud and Live Life.

Race 5 is the CTS Mile, another $500,000 race, and is once again a plate race which favours the higher merit-rated horses. I will be leaning towards them as these I believe are the only ones who can win – William Longsword, Safe Harbour and Just Sensual.

I am going to banker William Longsword in the PA and add the two fillies into the Pick 6.

I ride Janoobi who has a lot against him. He is badly drawn and held on form by Singapore Sling and has not raced on a left-handed turn.

Race 6 is the Betting World Cape Flying Championship and once again it is a weight-for-age race. I quite easily think that honour will go to Trip To Heaven but as he is now back to 1000m and has a bad habit of not starting well, he could just fluff his lines. The danger could be stable companion Carry On Alice, especially since the stable jockey has been declared on the mare by his trainer.

My third choice is Red Ray. Those three should definitely get you through the PA. For the Pick 6 include Talktothestars and Rivarine.

I ride Tar Heel who at level weights has little chance in this company.

Race 7 is the Klawervlei Marjorca Stakes and even though this is a plate race once again, it is a lot more competitive. The two leading older horses are Silver Mountain and Nightingale but both have shocking draws. Of the younger brigade you can lean towards Lady Of The House, Sail and Final Judgement. I feel Final Judgement could be more effective over 2000m.

I’m riding Star Express who has finished just behind Silver Mountain and Nightingale and she also needs to be included in the Pick 6.

For the PA pick at least three of those mentioned and for the Pick 6 go with all of them.

Race 8 is the Investec Cape Derby and I can only see four horses winning this – Table Bay, Edict Of Nantes, Elevated and Horizon.

For the PA go with Horizon, as he is still improving, and Table Bay. Put all four into the Pick 6.

I ride Zodiac Ruler who was disappointing last time out and battled to negotiate the turn. But if he comes back to his best he could be the surprise package.

Race 10 is a conditions race and finally I’m riding the horse with the highest merit rating and that is Ovidio. He’s an easy horse to ride and he stays. My only concern is that he ran over the marathon distance of 3200m three weeks ago with a weight of 62.5kg. Hopefully that has not taken too much out of him because if he comes in tip-top shape he could be a banker in both the Pick 6 and Jackpot. He is by far my best ride on the day.

For bigger Pick 6 players they could include Helderberg Blue and Krambambuli, both of whom have beaten Ovidio. But that was over shorter and the distance could suit my mount better.

Race 11 is a handicap with many horses with chances. My first choice is Brilliant Crimson. I ride Fifty Cents and he must have as good chance as most of this field. There are many horses who have beaten one another.

Race 12 and 13 are very open fillies and mares handicaps. They are usually very difficult, the form is very even, so put as many runners as you can afford into the Pick 6.

There is also racing at Turffontein today and my fancies on the card are Being Fabulous in Race 2, Kahal’s Legacy in Race 4 and Irish Pride in Race 6.