Tharoos could be hard to beat in Race 2 at Turffontein. 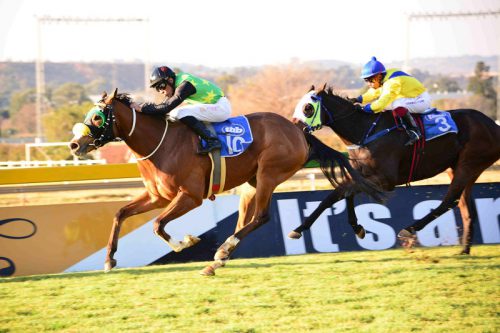 Last Saturday was Sun Met day. It was the first time we had a new sponsor and from a crowd point of view there were not as many people as in the past but I have been told that by next year it will be “big and special”.

The Sun Met itself did not deliver any surprises as the main contenders and the better handicapped horses dominated. In fact, most horses ran up to their form. If you compare my ride, It’s My Turn, and winner Whisky Baron, they ran exactly to form and to their ratings.

Naturally I would have liked to finish closer but It’s My Turn did not take the turn. He was giving me a tough time and I can only think that it was because in his last start he lost his shoe going down to the start and during the race. He pulled up a bit sore so it might have been a mental problem more than physical one because he was very sound during the race.

For the rest of the meeting I rode many places which I was chuffed about. The only horse who let me down a bit was Ovidio, although I’m being unfair as those horses who beat me actually held us on form. Krambambuli beat us over 1800m so over the longer distance I thought we could turn it around. Helderberg Blue beat Ovidio in the Gold Cup.

That ended the feature season in the Cape and now we are preparing for the Highveld autumn season before we move back to Durban for the winter.

Today we are racing on the Turffontein Inside track although I’m not taking part because I’m serving a one-week suspension. Sometimes it gives you a chance to get over all the niggling injuries but I’ve probably had too much time off to recuperate so I’m hoping to get back on some decent rides and get the ball rolling.

Race 1 is a Maiden Plate for fillies and mares and for a change we have quite a competitive field. I’m leaning towards Key Hostess. She jumps from pole position and having had two runs already is an advantage, especially at this track. The dangers are She’s Foxy and Succesfilly, both of whom have only had one start.

In Race 2 we should have a BiPot banker in Tharoos. He is drawn well and the form has been franked. Unfortunately he has not raced for a couple of months so we have to take his fitness on trust.

The danger on form is Racing Free but he has not run for over a year.

Race 3 is another Maiden Plate for fillies and mares but this time it does not look very strong. My first choice is Cold Cash who placed last time in only her second start. Unfortunately she is a four-year-old which is a concern as she is so lightly raced. So consider including Flamingo Vlei in the Place Accumulator. She’s drawn well and has the strongest form of the rest.

Jackman stands out in Race 4 and he could quite easily be a PA banker. However, he could be better suited to a more galloping track so in the Pick 6 include Aristocat and Speed Monitor.

Lucky Houdalakis and Marco van Rensburg had a great day at the Vaal on Thursday so they could score again with Aristocat.

I believe Speed Monitor will prefer this track and that could bring him into the running.

Race 5 is another competitive handicap but preference is for Detonation. He has a good draw and over this 2000m with its start on a slight bend makes it even more of an advantage. So on a difficult card he is a possible banker in the PA and for the Pick 6 consider Bush Pilot and Fangia, who beat him last time out.

If you look beyond those three you would probably need the field.

Race 6 is a Conditions Plate where the top rated horses are weighted to fight it out. That honour goes to Polyphonic and Kilauea. They should be good enough for the PA. For the Pick 6 consider Crystal Glamour, Bella Sonata, Sensible Lover and Silver Class who could improve at this course.

Race 7 is a handicap for three-year-olds who are on the up. My two main selections are Pagoda and Shukamisa. Pagoda is a possible PA banker but my concern is that he’s been coming from behind and taking a long time to get going so this track might not be ideal for his style of running.

Shukamisa looks the danger but he also tends to come from behind and has a widish draw but I would include him in the Place Accumulator.

For the Pick 6 one needs to include Unagi, who although well beaten last time, has a good draw. He tends to over race and the removal of the blinkers could help him settle.

Race 8 is a fillies’ handicap but Span Die Seile could be a possible banker in both the PA and Pick 6. This is her third run after a layoff, she has the blinkers back on and she is drawn No 1.

For the bigger players consider Our Miracle, Inga, Beautiful Shay, Dawn Flight and lightly raced Burning Rock although she has just won a maiden.

Race 9 is another handicap and the two with the best form are Old Oak Tree and Last Outlaw. However, their last couple of runs have not been great so it makes this a tricky affair. So consider Divar, Neuf De Pape and even Arpad.