Tilbury Fort looks the best banker on the Turffontein card. 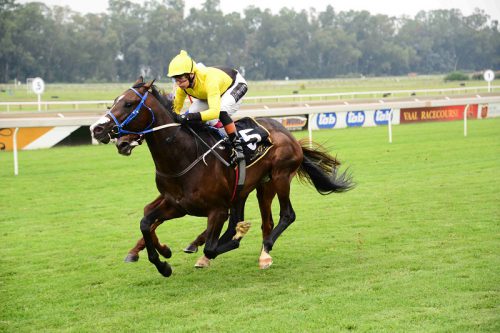 Piere Strydom has made Tilbury Fort, who runs in Race 6 at Turffontein today, a banker in all bets.

In two weeks’ time we have Classic Day, the second leg of the SA Triple Crown and the Wilgerbosdrift SA Triple Tiara.

The majority of the horses entered in the SA Classic and SA Fillies Classic also took part in the Betting World Gauteng Guineas and the Wilgerbosdrift Gauteng Fillies Guineas. As was the case with the Guineas, the SA Classic has attracted very few entries while the fillies’ races have huge fields.

Some people might be wandering why the colts’ fields are so small but I don’t see it as a problem as I believe quality is better than quantity. Your best horse will generally win in a smaller field as you have scarcer hard-luck stories and there are fewer slow coaches to get in their way.

With smaller fields, horses who often run on from the back can be placed a lot closer to the leaders just because there are fewer horses in their way. But there is a case for the opposite view because bigger fields, in general, tend to have a faster pace as more horses are trying to get placed and push hard early on. That can help the runners coming from behind.

There’s an old adage that the smaller the field, the bigger the upset, and that is all due to the pace. With no pacemakers the leaders tend to get an easy tempo up front and don’t stop. With a genuine pace, the best horse will win.

In the UK you often find small fields but you hardly ever see the trainer or jockey worry about a pace as generally they go a good gallop from the off.

I have no problem with the idea of having pacemakers in the race. In fact, it happens in the UK. At the end of the day if your pacemakers are good enough your results will be more authentic.

Racing is on the Inside track at Turffontein on Saturday and as we all remind punters, draws play a major part at this course.

Race 1 is a Juvenile Plate over 1000m and Laurent Du Var looks the right horse. He has had a run and is drawn No 2 so everything looks to be in his favour. He also had excuses last time but he was backed on the day so must show some potential at home. Others to consider are Mr Fire Eyes, Snow Boarding and So Var.

There are also some first-timers so keep an eye on the betting.

My best ride of the day comes up in Race 2 with Spring Breeze. She has experience and a good draw but the concern has to be that she is coming back in trip from 1400m to 1000m. You also have to respect some unraced horses. For the BiPot include Spring Breeze with any first-timer who attracts betting.

Race 3 is the first leg of the Place Accumulator and Zouaves looks the horse to beat. He finished second in his only start although he did take time to get going and on this Inside track it could be his undoing. So include Al Hamd as back-up in the PA.

Race 4 looks quite a competitive maiden field as none of these horses stands out. My first call was for Princess Aurora as I have been riding her over distances that are too short. Her last run behind Simply Royal has worked out well so include Boudica as well as she has only had two runs and could improve.

Those two should be good enough for the PA but for the Pick 6 consider Charter Jet and Flipflash, who is also lightly raced.

Race 5 is a Pinnacle Stakes and your top rated horses are favoured to prevail. They are Juxtapose, Intergalactic and Tahini. My first choice is Tahini as she has run lately and she could be fitter than the other two who have not raced since November.

I’m going to banker Tahini in the PA while the other two need to be included in the Pick 6 as they are quality fillies.

Race 6 contains my best bet of the day in Tilbury Fort. He ran in the Gauteng Guineas and under the rules, his fourth place could not earn him a penalty so he should, theoretically, be carrying 5kg more. He’s a fit horse, drawn well and is a banker in all bets.

If you don’t want to banker Tilbury Fort the other alternatives are Racethegreenlight and Coral Fever.

I did phone for the ride on Tilbury Fort but Sean Tarry wants to keep regular riders on the horses for the season. Raymond Danielson is likely to ride him in other features and I’m committed to Janoobi in the Classic.

In Race 7 we have another possible banker in Top Shot. I’m riding the early joint favourite, Samurai Blade, but Top Shot finished 2.80 behind my runner and is 10.5kg better off, making him, at his current price, the value bet of the day. Even though horses don’t run on paper the facts are there for everyone to see. I have no intention of insulting anyone but if you don’t work on form, then there is no point having handicaps and formbooks.

Top Shot has to be banker in the PA and possibly the Pick 6. His only danger is Master Switch as he has raced in Grade 1s and has performed well. The unknown is his fitness.

Race 8 is a difficult fillies’ handicap as the horse with arguably the best form is Diamond Noir, but she’s jumping up in distance and has a bad draw to overcome. For that reason you need to include Zappy Choice, Fashion Blast and Lebanese Tractor. For the Pick 6 try to go as wide as you can but consider Iridium Silver and Russian Star.

I ride Snow Path who possibly needs her merit rating to drop in order to be competitive.

Race 9 is another fillies’ handicap and even though it is quite competitive, my first choice is Dalley. She has had some bad draws and finally has a good barrier position. Her merit rating has also been falling.

Her danger could be Russian Friend who has blinkers on for the first time. I tried to get the ride but failed to get the nod. It was my suggestion to try blinkers as she’s been battling to keep up with pace and gets too far back in the early stages. Her undoing could be the short straight.

For the PA you might need to go a bit wider, even though there are some who are badly drawn. They are Burning Rock and AP Chanel. As Cool Fantasy is drawn No 1 she is also a possibility. Go with Dalley and Russian Friend in the PA plus two of the others.

For the Pick 6 put in all of those mentioned and any more if you can afford it.