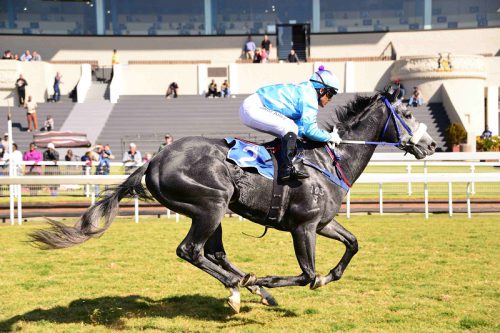 TUNED UP. Heavenly Blue needed his Guineas run and will strip a lot fitter for today’s R2-million SA Classic (Grade 1) over 1800m at Turffontein.

Classic Day tops the menu at Turffontein on Saturday and we have the running of the second leg of the SA Triple Crown and Wilgerbosdrift SA Triple Tiara for fillies. I’m riding the only Triple Crown contender in Janoobi as we won the first leg, the Betting World Gauteng Guineas, last month.

I would obviously love to win the SA Classic on Janoobi and if we do, and the distance does not turn out to be a problem, then who knows, we could have a crack at the SA Derby over 2450m next month. When Janoobi won the Guineas he was spot on fitness-wise for that race. To win the Classic will be a tough task as my stablemate, Heavenly Blue, was not fully tuned up for that run, so with normal improvement in work and the extra distance, it could be difficult to beat him.

The same applies to Al Sahem who finished ahead of Heavenly Blue. To sum up, they look the two to beat with Heavenly Blue a possible Place Accumulator banker. But in the Pick 6 you will need to put in both and perhaps my horse, in case he stays.

If you want to go further than that, the only other possibility could be Furiosa.

Smiling Blue Eyes is looking a realistic contender for the Triple Tiara. Her hardest task looked to be the Wilgerbosdrift Gauteng Fillies Guineas because she is probably least effective over 1600m. She also overcame No 16 draw last time and raced three horses wide for much of the trip.

This time Smiling Blue Eyes has a much better draw and over this 1800m, is probably a Place Accumulator banker. In fact, I finished fourth behind her on Babbling Brooke and while I was scrubbing away at the 400m mark Smiling Blue Eyes came past me through a small gap with consummate ease with the jockey hardly moving on her.

The only danger could be her stablemate, Safe Harbour. She ran a poor race last time but if you ignore that run she has the strongest form. I would add her into the Pick 6.

I’m riding Babbling Brooke who is well held by Smiling Blue Eyes but I’m hoping the extra distance will make her more competitive.

Race 1 is a Juvenile Plate over 1400m and Aurelia Cotta did really well in her only start and is the horse to beat. The only danger looks to be Like A Panther. My ride, Roman Flight, finished behind Like A Panther who had a shocking draw. With a No 3 barrier position this time our chances of reversing the form do not look good.

My third selection is, in fact, Vortex Star.

Race 2 is a Maiden Plate over 1400m and the horse with the best form is Walker – and he jumps from pole position. His only danger could only be unraced Brave Nomad so watch the betting.

Race 3 is the Pretty Polly Stakes and as these are young fillies who are still on the upgrade, it does make it tricky. On current form two horses stand out. If you ignore Kissable’s last run she would come out a clear winner with the only danger being Green Plains. Those are my two for the PA.

I ride Spring Breeze who could need more distance in the future and on current form I can only hope for a place.

Race 4 is the Protea Stakes and we have a PA banker and possible Pick 6 banker in Barrack Street. He won with consummate ease when beating Alfolk but these are young and improving sorts so to be on the safe side consider Alfolk and Silver God for the Pick 6.

I ride Whorly Whorly who on form will need to improve if he is to feature.

Race 5, the Man O’ War Sprint, is not a handicap and therefore your highest rated horse should win it and that is Green Pepper. The fact she is receiving weight from the second rated runner, Ektifaa, for me makes her a banker in all bets.

Race 6 is the HF Oppenheimer Horse Chestnut Stakes over 1600m at set weights so Legal Eagle looks a certainty to win this. Unfortunately he has not raced since finishing second behind Whisky Baron in the Sun Met earlier this year and might not be at top fitness. He should be a banker in all bets but if not fully wound up, the only danger is New Predator.

Race 9 is the Jacaranda Handicap and this is quite tricky because a lot of them have run close to one another. Try to include as many as you can in the PA and as there are a lot of possible bankers early on, maybe take the field in the Pick 6. There is an estimated pool of R5-million and it would not be nice to go out in the last leg.

My selections, in order of preference, are Negroamaro, Patchit Up Baby, Tiger Flame and my ride, Polyphonic.

Race 10 is the Caradoc Gold Cup and as this is a conditions race your best handicapped horse should win it. Once again, on these factors alone, Zafira looks a hard horse to beat. The distance is no issue, the fitness is no issue and I make her a banker in everything.

The dangers are Save The Rhino and Royal Honour.

Race 11 is a fillies’ handicap which is quite competitive. My selections are Fish River Canyon and Triple Digit, who has run against better and her merit rating is dropping. I ride Iridium Silver who on best form could win but she has had some issues so is very difficult to predict.

Race 12 might only have six runners but every horse has a chance of winning. The horse we may all have to beat, and the biggest improver, is Bold Viking.

I’m riding Kings Archer who has run against better so he must have a chance.