On the prowl for July ride

Janoobi in Daisy Guineas next Sunday will be the first raid on Durban. 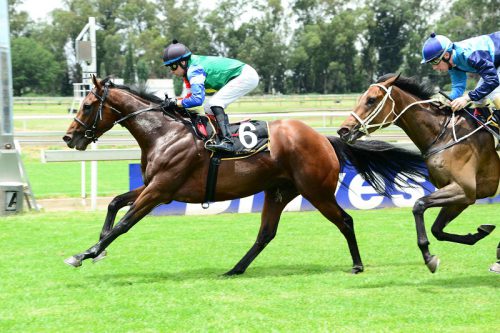 STRONG CREDENTIALS. Crazy Vision has raced against some decent opposition and off a light weight could be the runner to beat in Race 7 over 1450m at Turffontein today.

Saturday we are racing at Turffontein but I will be at Kenilworth as racing manager for Mayfair Speculators Derek Brugman has asked me to come and ride one of their runners in the Grade 3 Winter Guineas.

I am, however, concerned stable jockey Anton Marcus has chosen another horse but it does look a very open race and we are drawn No 1 which will help our chances. There are some quality horses contesting the race so I’m hoping I can earn a cheque for the meeting because naturally I could have had some decent rides on the Highveld.

Next Saturday is our last big meeting of the Autumn season in Joburg and from there we will be raiding KwaZulu-Natal on a regular basis. In fact, my first visit will be next Sunday and I’m hoping to start off well as I ride Janoobi in the Daisy Guineas. He is the highest rated horse and we are drawn No 1, always an advantage over 1600m at Greyville.

The entries for the Vodacom Durban July are out and I will be looking at opportunities for a ride in the race. I will be riding a lot of horses leading up to the July and hopefully something will stand out for me but a lot can still happen between now and 1 July.

Racing in Joburg is on the Turffontein Inside track and Race 1 is a Maiden Juvenile Plate. Alraune could get you off to a winning start. She has most of the field held and the fact she had a bad draw last time didn’t help her chances. Her danger could be Kenna who I rode last time. I found she was struggling a long way out but she gives the feeling she will prefer the extra distance. The fact Alec Laird told me before the last race that was the case, confirms my suspicions.

Race 2 has my best bet on the card in Ali Bon Dubai. He has the strongest form, he’s drawn No 1 and the blinkers could just be what he’s looking for. His only danger is Vortex Star who is still a two-year-old and might battle to beat the hard knockers at this stage of his career.

Race 3 is the first leg of the Place Accumulator and I feel two horses will fight it out –    Pillaroftheearth and Twice A Dancer. Both need to be included as they are all young horses and there could be good improvement from some of the opposition.

A horse who could be good value is Rebel’s Champ. He finished eight lengths behind a good sort in Wonderwall in a strong field and was taken out in the last 200m of the race. He could have finished a lot closer. Drawn No 1 will be a huge advantage.

In Race 4 you could have another possible banker in Only To Win. She has placed in all four starts so you can banker her in the PA but as she is only a two-year-old you have to consider Boudica. She ran second behind Guns And Roses who won again on Thursday.

They are the main fancies for the Pick 6 but also consider A-Rod and Espera, who could make a lot of improvement.

Race 5 is another Maiden Plate but over 2000m. A possible PA banker could be Advance To Go but she has not run over this distance and I’m not sure if she will stay. She is my first choice with Eversilver the main danger. However, she tends to lose ground at the start and on this track with the short straight that will not be in her favour. They could be good enough for the Pick 6 but if you look beyond her you have to consider the field.

Race 6 contains quite a competitive field as many horses have chances. Cold Cash and Burning Rock have very similar formlines but in a small field everything could fall into place for Cold Cash. She is the only horse who could lead early as the rest tend to come from off the pace so we will banker her in the PA.

For the Pick 6 you could also consider Burning Rock, Snowdonia, Russian Star and Consequentially as well.

Race 7 is a very difficult race as the horse with the best form is Raasmaal but he shows a lot of speed and going 1450m could be his downfall.

My first choice is Crazy Vision who ran second in a strong field but he could be a banker in the PA. As he has over raced this shorter distance could be more in his favour so with a light weight and a good draw he could be the one to beat.

For the Pick 6 consider Raasmaal, who will be a major contender if he does stay the distance, as well as Silver Sails who has won two of three and done nothing wrong. Bonnie Prince is having his third run after a rest and had excuses last time.

Race 8 is a competitive fillies’ handicap but my first choice is Alileo. She won very impressively first time out. She is a good looking filly who could make a lot of improvement but she has only beaten maidens. Favour’s Pride and Yellow Metal have raced and beaten a lot stronger which means Alileo has to make a huge improvement.

Winter Al has the same winning form but she often tears off to the front over 1000m and having the worst of the draw she does not have a lot going for her over 1200m so in the Pick 6 include just those three.

Race 9 is a competitive 1200m race for fillies and it helps to take the draw into account. My first selection is Ponchielli as she is lightly raced and could make the necessary improvement. The danger is Pied Piperess who is well drawn at No 2. Those two need to be included in the PA with my roughie, Embrasiatic. She ran behind Carry On Alice who is a multiple Grade 1 winner and the fact she has dropped in the ratings and jumps from pole position has to give her a huge advantage.

Other possibilities for the Pick 6 are Always A Lady, and High Seas Beauty, although she has a shocking draw and will need some luck.