Unagi can kick the day off well for punters. 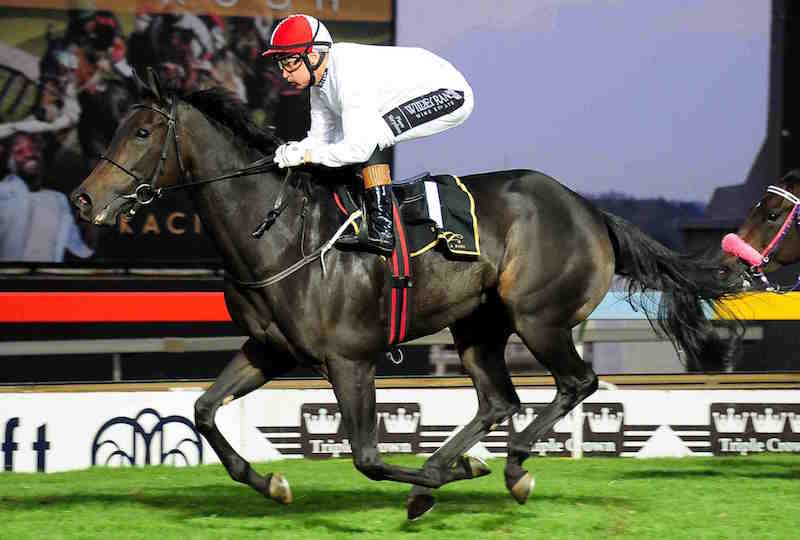 BEST RIDE. Polyphonic, who runs in Race 10 at Turffontein today, is Piere Strydom's best hope for a winner at the meeting.

Today the final big meeting of the Highveld Autumn Season will be staged at Turffontein and topping the card is the Grade 1 Premier’s Champions Challenge with a huge stake of R4-million.

I wish I had a ride in the race!

As this is a conditions race it will suit the higher merit rated horses quite significantly. The horse who stands out is Legal Eagle. If everything goes according to plan there is no way he can lose. He has most of the field well held and is a banker in all bets.

Those who could chase him home are Brazuca, French Navy, Master Sabina and Nother Russia.

The second most lucrative race on the card is the R2-million SA Derby. They are all carrying level weights so you have to fancy the best handicapped runners. Heavenly Blue falls into that category and looks another banker in all bets. Many of the runners are trying the 2450m distance for the first time but the way he runs suggests Heavenly Blue will enjoy the distance.

There is also some uncertainty about the staying ability of his likely dangers. They are Al Sahem, Furiosa and possibly even Pagoda. The rest of the field will have a tough task.

Another Grade 1 feature on the card is the Computaform Sprint and it is a race where the higher merit rated horses have the best chances. Those two are Carry On Alice and Trip To Heaven. They are the main protagonists and they should fight it out.

For the Place Accumulator you could banker either one but as this is a huge field and some could misbehave – over 1000m there are many highly strung horses – they could fluff their lines at the start and forfeit the race. So put both in the PA and for smaller Pick 6 players they should suffice.

If those two are not good enough for your perms others to consider are Jo’s Bond, Elusivenchantment, Brutal Force and Rafeef, in that order.

I ride Brutal Force. Even though he was successful last time, he was handicapped to win. Some people think he won with something in hand but they may have seen a different race to others. He didn’t feel all that sound and he looked a bit big so hopefully he is fitter now. He is not well handicapped and he would prefer if the race were over 1160m. I would be happy with a place.

Race 1 is a handicap and you could make a few rands to kick start your day by going with Unagi. He has had excuses in the past and has run against some very strong company.

His dangers could be Kings Archer and Bold Viking but as Kings Archer did not give me anything in the finish last time, it makes me think Unagi has even a better chance of winning.

Race 2 is another handicap where many horses have chances but the main fancies are all from the Sean Tarry yard. My selection is Ribovar, Machismo, Mombela and Kapitan. I’ve based my selection on the fact that as a three-year-old Ribovar has the most scope for improvement but it wouldn’t surprise me if I have it all wrong.

Race 3 is the Gold Bowl which is a handicap so all the horses have a realistic chance of winning. But there are a number who are running under sufferance which means they should be carrying less than the 52kg allocated. I would cut the selections down to Ilitshe and Let It Rain, who both seem to be still improving. Their danger could be Kanonkop as on form he also has a winning chance but has yet to race over this distance. Kanonkop did win his only try over 2400m and therefore needs to be included.

They should be good enough for the PA but as this is over 3200m it could be wise to include hard knockers like Storm Warning, Smart Mart and Coby.

Race 4 is the Grade 1 SA Nursery over 1160m, which can be tricky as these are all two years old. The horses who stand out are Mustaaqueem, Wonderwall, Barrack Street and Naafer. The first two should be good enough for the PA but for the Pick 6 add the other two.

I ride Quinlan who is well held on form and I would be very happy if we can find the minor money.

Race 5 is the SA Fillies Nursery and once again some could improve better than others. On current form, if you dismiss Kissable’s last run, she has to be the horse to beat. Her dangers are Daring Diva and the Mike de Kock coupling of Fish River and Silver Thursday.

Another horse to consider is Twelve Oaks as she won her only start with ease. Include all of those in the Pick 6 but for the PA you can get away with Daring Diva, Kissable and Fish River.

Race 6 is the Wilgerbosdrift SA Oaks over 2450m and once again the conditions benefit the highest merit rated runners. But in this race they have run very close to one another and it looks highly competitive.

The best horse is probably Smiling Blue Eyes if you ignore her last run. She beat them all with ease in the Fillies Guineas and could come out on top. As it is competitive you might have to play on the safe side and include Orchid Island, who won her last start from a shocking draw, in the Place Accumulator. Both are drawn badly again but over this distance you can sort of get away with a wide draw.

For the Pick 6 you need to consider Bi Pot, Belle Rose, Oriental Oak and Wind Chill.

I ride Parabola but both Chase Maujean and Gavin Lerena could have had the ride ahead of me and selected other runners. She is also held on form.

Race 10 is the Gerald Rosenberg Stakes and again the highest rated horse should come out on top. I ride Polyphonic who holds that position. In her last two runs she’s come from shocking draws and we had no luck in running but she still managed to run decent races. But a lot of these horses have run quite close together so you have to consider Trophy Wife, Al Hawraa, Intergalactic, Flying Ice and Heaps Of Fun.

Race 11 is a handicap and I considered Military Award as my value bet for the day. My only concern is that Silvan Saint could be decent as he won in only his second start. Those two could be floated in Trifectas and Quartets. Military Award has had some bad draws and has run against some decent sorts while on this occasion he is not taking on the same quality of horses.

Race 12 is the Camellia Stakes and once again it favours the highest merit rated horses. That goes to Green Pepper and Exquisite Touch and they should fight it out. Horses who could chase them home include Seattle Singer, Crystal Glamour, and my ride, Joan Ranger.

Don’t forget we are racing at Greyville tomorrow. I’m going down for Janoobi and even though it is competitive I have high hopes as we are drawn No 1 and Greyville should be ideal for him.

Tarry holds the keys to outcome of Nursery