Chances for Striker in KZN 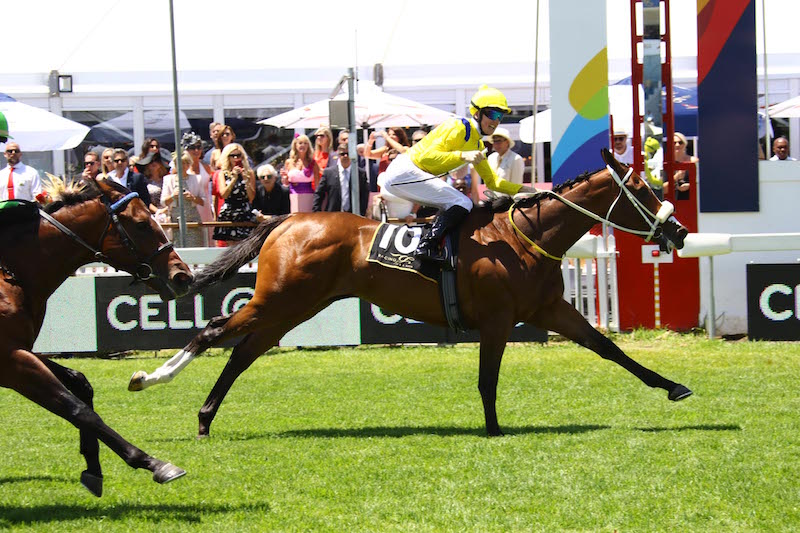 HIGH EXPECTATIONS. Call To Account in Race 5 is rated by Piere Strydom as probably his best ride on today’s Scottsville card.

Today I’m riding at Scottsville where we have the big sprint day. It’s been a good meeting for me as I have had a number of winners in these 1200m races and at Scottsville in general. In fact, my first ever winner as an apprentice was at Scottsville.

I have come off a short rest where I’ve been trying to recuperate and I suppose as I’m getting older all the niggling injuries start to appear. It is the case with all sportsmen – nothing major, just a bit a wear and tear.

The main race today is the Grade 1 Tsogo Sun Sprint and I ride Brutal Force. I’m hoping he runs well as on form he must have some sort of a chance. Unfortunately he is not the soundest of horses and the fact Anton Marcus is putting in a huge effort to make the riding weight on Attenborough for his “boss”, Markus Jooste, would definitely have to make him the horse we all have to beat.

In Brutal Force’s favour is that he is a huge horse and he doesn’t put in much of an effort at the track in the morning so he’s been coming into his races overweight. Hopefully after two good runs he has shed some weight and will be a lot fitter horse.

This race is a handicap and is, therefore, highly competitive. Many horses have winning chances. Talktothestars, London Call, Bull Valley, Bulleting Home, Sergeant Hardy, Search Party, Attenborough, Table Bay, Janoobi and Exelero all have winning chances and need to go into the Pick 6 and as many as you can in the PA.

If I had not got the ride on Brutal Force I would have taken Bulleting Home. He ran a good race last time at level weights and is as sound as he has ever been.

But the ride I would have liked to take, had I been able to do the weight, is Janoobi. He has lots of speed and the fact he won over 1600m last time was only because of his ability but as a result of that ability I cannot see why he shouldn’t win over 1200m.

The SA Fillies Sprint is a plate race and your best handicapped horses should have the edge. Carry On Alice has that honour and she is potentially a PA and Pick 6 banker. She has beaten the best in the country and now she only has to take on her own sex, which makes her chances even stronger.

I’m riding Joan Ranger who has done quite well but she is taking on a lot stronger this time at level weight. I would be happy with a place but hopefully I will be pleasantly surprised.

The Gold Medallion is for two-year-olds but they are lightly raced and still immature. The unofficial merit ratings put Naafer quite significantly on top as he has already run second in a Grade 1 race. He looks the horse to beat.

The back-up horse in the PA is Sand And Sea as he has won his only start and that was against winners.

I ride Varello who’s won two out of three starts. He is held on form and has developed a bad habit of jumping sideways out of the starting stalls. That has cost him a win but he’s not without a chance, especially if he does not fluff his lines at the start and could be the next horse in the PA.

As these are all young horses you probably have to go wide in the Pick 6.

In the Allan Robertson Championship for two-year-old fillies Green Plains is the highest rated followed by Daring Diva and my ride, Call To Account, who won her second start against winners in a listed feature at Kenilworth. The fact she ran a good race against colts on this track in her comeback run has to be a huge advantage. She could arguably be my best ride on the day.

The race doesn’t stop there so watch the betting and include as many as you can.

Tomorrow we are back at Turffontein and Race 1 is a Maiden Juvenile Plate for fillies. The two horses who stand out are Let’s Twist and Tigerlace. Their dangers could possibly be my ride, Azkur, but unfortunately she has the worst of the draw. Last time she over-raced over the same distance and that will not make our task any easier.

Race 2 is another Juvenile Plate and there are some lightly raced youngsters. The main protagonists are No More Words, Effortless and Microbe. I ride Alraune who showed a lot of speed over 1600m while over-racing at the same time. Maybe coming back to this distance could help her chances.

Race 3 is another Maiden Juvenile Plate and there are some who are showing potential. But the horse who could be best is Silver God. He ran second on debut and then raced in a feature where he finished sixth over 1100m. He moves up to 1600m which should be ideal and he should be a Place Accumulator banker.

Race 4 is a Maiden Plate and here we have another potential banker in Zerodarkthirty. As he holds my mount, So Var, who is the main danger, it makes Zerodarkthirty even a better bet.

Race 5 is a handicap which makes it more difficult but the runner to beat, based on his 0.40-length second to Brutal Force last time, is Clever Guy. If Brutal Force has any chance at Scottsville then Clever Guy has to be the best runner in this race.

For the PA banker Clever Guy for the Pick 6 consider Ronnie Rocket and Hashtag Strat as back-up.

Race 6 is a Pinnacle Stakes and should favour your highest rated runner. In this case it is Storm Warning but his form has not been great of late. Even though you have to include him in the PA you have to add in B Twenty One and Save The Rhino.

For the Pick 6 add Lions Emblem and Let It Rain.

Race 7 is another handicap and in general, they should have equal chances of winning, However, over 1600m a good draw has to be a big factor. So consider Trellis, Sha-Boom Sha-Boom, Dalaal and Teenage Dream for PA. For the Pick 6 go wide as we went light in the early races. I ride Inga who is held on previous form and she has a shocking draw to overcome

Race 8 is plate race where the best handicapped horse should win it. That honour goes to my ride, Bella Sonata who is definitely my best on the day as she has run behind Nother Russia and this time she has the benefit of draw No 2.

Unfortunately she’s coming back in distance and the fact she is running against colts makes the task harder as the field is more competitive.

Doosra, drawn No 1, and Chili Con Carne, are decent up-and-coming colts who need to be respected. Those should get you through the Pick 6 and for the PA, Bella Sonata looks a banker.

Race 9 is another handicap and the obvious horse is Brave Nomad. He has won his only two starts and jumps from No 1 draw, a huge advantage over 1400m. As the strength of the fields he takes on is now getting harder, include Refuge and Resolute Captain.

I ride Querari Viking and I’m hoping he can place. Unfortunately, due to early miscommunications, I missed out on Refuge who I usually ride. He should love this more testing 1400m and from a good draw has to be one of the horses to beat.