Today at Greyville we take part in a different kind of meeting. 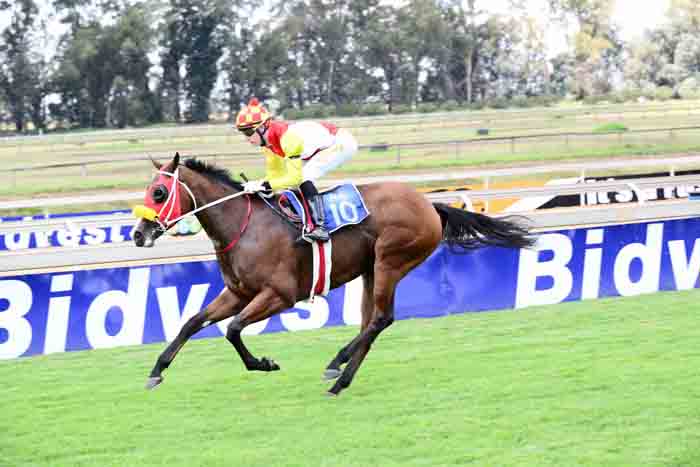 Little Genie has been priced up at 6-1 for Race 5 at Turffontein tomorrow and Piere Strydom sees Dominic Zaki's filly as the best value on the card.

We have had some international competition against the best jockeys in the world but on this occasion we will compete against one another on a provincial level in the Interprov Rider Cup.

It is something you look forward to because you hope to have the best jockeys in the county but unfortunately we have been let down by a couple of the Cape Town guys. But no worries – the show will go on!

The only way to make the competition as fair as possible is by giving us rides in merit-rated races as that should level the playing fields somewhat, but only two of the races are handicaps. The first event is a Maiden Plate and the third race is a Stakes race which does not give everybody theoretically an equal chance.

I have found two decent bets on the card. Real Princess in Race 1 looks really hard to beat and should get you off to a good start, even though she’s at restricted odds. My next possible winner is Euphoria in Race 4. She has the highest merit rating and is drawn No 1 which is a huge advantage on this track.

When the entries first came out and we didn’t know which races formed part of the Interprov in which the mounts are randomly drawn, I and two of the other top jockeys in the country made the call to trainer Johan Janse van Vuuren to get the ride. In the end none of us got it and it went to Muzi Yeni.

Possibly my best ride on the day is in the Interprovincial and is Zortziko in Race 5. He has a good draw but at odds of 7-1 that doesn’t say much for the rest of my rides.

The main race is the Mercury Sprint and I’m riding Willow Magic. He should struggle in this field as in the past he’s been soundly beaten by Captain Of All and we are now 6kg worse off, which makes Captain Of All close to a certainty.

His danger could be Legislate who some might think will find 1200m a bit short for him but he has shown some really good speed in the past and might just surprise.

Tomorrow we are racing at Turffontein and kick off with a work riders’ event, which is always difficult to assess as you have weaker horses running with some inexperienced riders aboard. If all goes to plan the horses who should fight it out are Consider The Cat, Captain Disko and Latino Heat.

Respect any first timer who gets supported in the betting as he doesn’t have to be too good to win in this company.

In Race 2 I would make Saraaba a very hard horse to beat but as there are many unraced horses about whom we know very little, it is difficult to make a selection. I would still banker Saraaba in the Place Accumulator. If you want back up then include the well-bred first timer Lily Love, who has found some betting support.

I ride Sister Mary but even though she finished fourth in her first start the form is not very strong and I can only expect a minor place.

Race 3 is another Juvenile Plate and I ride Gentleman Only. Even though he’s had quite a number of places his form is not much to write home about so I would include In The Moment, who finished behind Gentleman Only in his first start and could make quite a bit of improvement.

As there are a number of first timers I would suggest following the betting and including some more runners in your PA. In the Pick 6 include as many of the raced horses as possible.

Race 4 is another weak maiden field. I would think the two best handicapped runners are Red Savage and Penstock. They should fight it out so I will go with them in both the PA and Pick 6. If you don’t like them then you could even go with the field for the Pick 6.

Race 5 is another competitive race with many horses finishing quite close to one another in the past. Of those horses Regal Rose seems to have the edge. I would include her in the PA and possibly Little Genie, who is the runner we may all have to beat. She won her last start by over seven lengths and although it was in a maiden plate there have been numerous winners from that form line.

She has been priced up at 6-1 and could be the value bet on the card.

I’m riding Lady Al. She could easily place as she doesn’t have much to find on Regal Rose and Alcanina but hopefully she behaves at the start as she has given trouble before and could fluff her lines.

Other for the Pick 6 are Captain’s Diva, Lady Al and Alcanina.

Race 6 is another tough race. The horse with the best collateral form is Devious Tiger. I rode him last week over 1400m from a bad draw and without blinkers. My possible advice to trainer Clinton Binda could have been wrong and this could be his best distance.

He’s by no means a banker and I would include Heywot and Cannes in the PA. The Pick 6 you could include Beza and Francois P.

My two main contenders for Race 7 were Red Rain and Scent but Red Rain ran on Thursday and finished last so Scent is my PA and Pick 6 banker. He has run against the likes of Legal Eagle in feature events and is running off a very low merit rating.

If Scent is not your confident selection you could possibly include my mount, Master ‘N Commander, but he has not competed against the same quality of competition as Scent. Master ‘N Commander has run against some average sorts, was beaten and still penalised for running second. He now has to give Scent 5.5kg.

Race 8 looks quite competitive with numerous horses having chances, however, the stronger form line seems to be Shepherd’s Warning and the two-year-old Bahir. The two should be good enough for the PA and I will also take a chance with those two in the Pick 6.