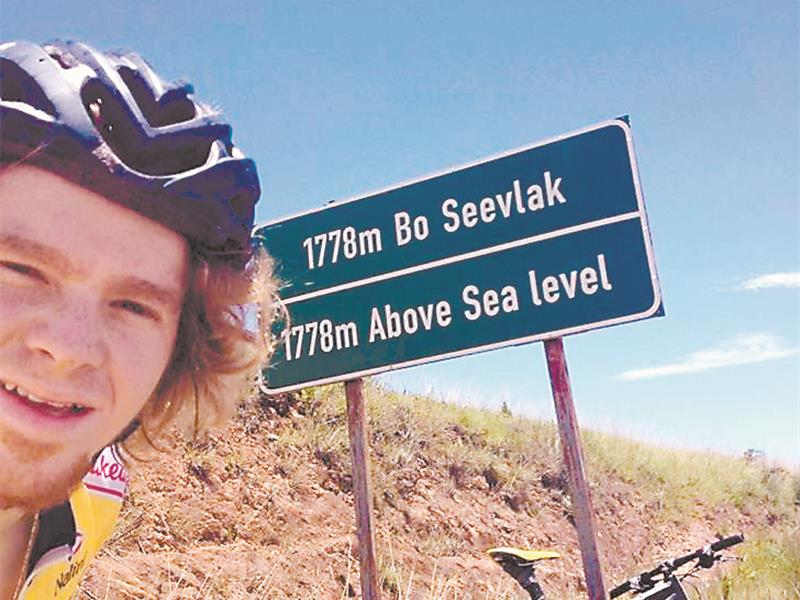 WHEELED CRUSADER. Cycle expeditionist Keegan Longueira's goal is to be the fastest man to cycle from Cairo to Cape Town, a journey he plans to tackle in January 2015. Pictures: Supplied.

Well, almost – since he is currently sporting a broken left hand which he injured during a hockey match.

Longueira said the injury was quite a setback, but it was perhaps a blessing.

“I had some time to tweak my diet, spend time reading and growing my mind. So I think it was a blessing,” he said.

“It was never about the cycling or the adventure, it was simply about being out in the wilderness, alone, where I could answer so many questions about how ‘life was supposed to be’,” he said.

Longueira said his dream was to be the man to cycle the fastest from Cairo to Cape Town, with a solo bicycle trip planned to tackle the route in January next year.

Robert Knol from the Netherlands currently holds the record for the fastest bicycle journey from Cairo to Cape Town, which he set in 70 days, three hours and 50 minutes in 2011.

Longueira said he would give it his all to break Knol’s record; however, the feat would come second to raising funds for the non-profit organisation Operation Smile, which provides free surgery to children with cleft lip, cleft palate and other facial birth defects.

Following a talk by motivational speaker and extreme adventurer David Grier, Longueira was inspired to support the organisation.

“My dad often tells me I work in an economy of ‘surgeries’ which cost R5 500 each. I think that excitement of knowing that when

R5 500 is handed over to Operation Smile, someone out there who has never had an opportunity to smile, is soon going to be able to do so,” said Longueira.

“It touches my heart to think individuals will finally be able to walk around with confidence.”

Longueira’s book Two wheels and a Chain, which tells the stories of his adventures, launched at the Methodist Church in Witbank, Mpumalanga yesterday.

Asked how the book came about, he said: “I have this reputation for putting together a very entertaining and insightful blog each day while on a trip. After one particularly tough day I remember reading a comment where somebody told me that they don’t have time to follow the trip each day and I should write a book.

“I think I just took it from there.”

With a number of expeditions lined up, including the Trans-Africa adventure race from Beitbridge in Zimbabwe to Cape Town in October, Longueira said he loved to keep busy.

“When you love what you do, it’s never work. I don’t have two lives, my work, my passions, my friends and my family are all intertwined into one,” he said.

“We overrate the ‘work’ we do in life. I think if we take that ‘work mentality’ out of our work and we become more creative and passionate again, we have solved the problem.”