Picking up Casey B Dolan's debut novel, When the Bough Breaks, you'd never think the story was spurred by a reading of 50 Shades Of Grey. Though worlds apart, it was that popular erotica that moved Dolan to pen another book – the follow-up to her no-holds-barred autobiography, An Appetite For Peas.

She explains: “My aunt sent me a copy of the book and I read it within four hours. I didn’t think it was very well written and wanted to write my own version. I started my book with that intention, but 30 pages in and the story took a completely different direction.

“It sounds clichéd, but the story kind of wrote itself. The characters and stories demanded something else from me, so I let the creative take over and allowed the story to unfold naturally. There is certainly still a sexy edge to the book, but it’s more of a heart story, about love and family.”

The plot revolves around Amber Whittington-Jones, an elderly mother dying of cancer. In her last days, she writes a letter confessing all her transgressions and the reason for her choices. Then the story takes a turn for the worse. Not wanting to divulge too much, she says: “These are things we all face in life so everyone can relate.”

Although Dolan herself experienced the loss of a loved one to cancer, she asserts that the two events are unrelated.

“Having already written my memoir, I wanted to write as far away from my own life as possible,” she says.

Known mostly for her career in television, film and radio – her most recent stint in the award winning South African film Konfetti – as well as being voted FHM’s Sexiest Woman, Dolan once again proves that she’s not just a pretty face.

A prolific reader, Dolan is exceptionally skilled at writing dialogue without dialogue tags and not losing her readers in the process. This is no easy feat.

She uses their presence and their relationship with the reader to push the plot forward.

“I’ve been involved in drama and the arts for a long time, working with dialogue and learning about different kinds of characters.”

Despite her involvement in so many projects, Dolan admits that writing remains one of her favourite forms of expression.

“When you’re expressing yourself in the form you most enjoy, you can’t be anything but alive. Nothing is more soothing for my spirit,” she says.

Over and above that, her most significant goal is to raise her son to be a good person in the world. Dolan feels that this will be the most important thing she’s ever done. 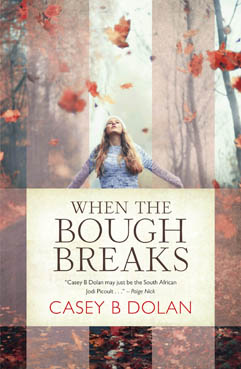