Mandela and all that jazz

For those aboard the cruise liner MSC Opera, news of Nelson Mandela's death seemed only a concern for landlubbers. 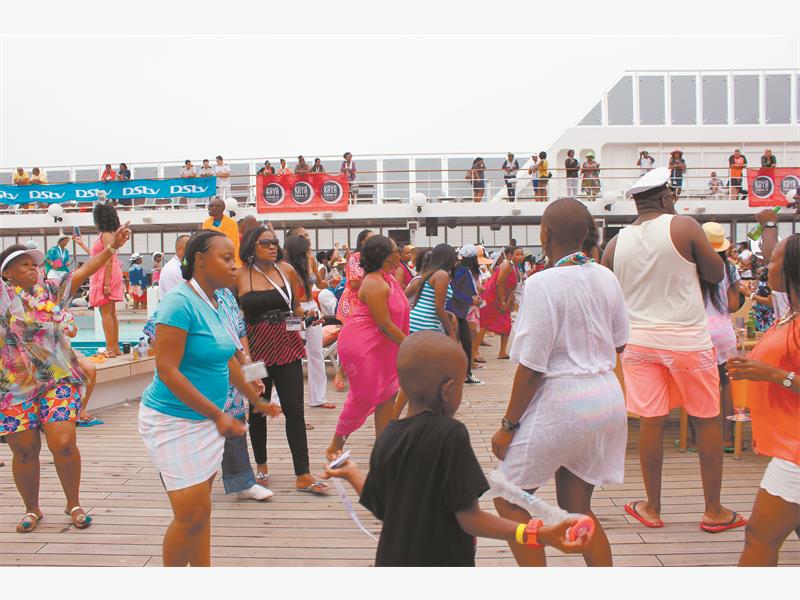 CHILLED. Young and old have a good time on board the MSC Opera.
Pictures: Supplied.

The Kaya FM Soul & Jazz Cruise, which kicked off on the morning after his death was announced was not greeted by doom and gloom, but a celebratory determination to have a good time.

Most holidaymakers were already aware of Madiba’s passing, but OR Tambo International Airport was buzzing as usual, save for a static few who were glued to LCD screens looking for more information. It was much the same at Durban’s King Shaka Airport, with people getting on with their business and running in various directions fulfilling whatever obligation they might have had on that day.

Once on the cruise ship, people seemed reluctant to slow down their pace and take in the news in their cabins, where they could watch the numerous international channels that had started rolling out footage and documentaries about Mandela. At around 3pm, most revellers converged on Deck 11 for Kaya FM’s welcome by CEO, Greg Maloka and Kaya FM DJs. The drinks started flowing pretty quickly, before folks could even unpack their bags. CODESA. The popular dance move was one way of paying tribute to Nelson Mandela while out on a holiday cruise.

At the microphone, Maloka assumed the role of a firebrand political speaker shouting: “Viva, Nelson Mandela, Viva!” The audience replied, emphatically: “Viva!”. This was followed by “Long live the memory of Nelson Mandela” and so forth. In the spirit of proceedings, Maloka went on to add that “if it was not for Mandela, we wouldn’t be on this cruise ship”.

This was a bizarre statement – at face value it could be taken to mean that cruise ships were on people’s minds during the struggle, which makes the assertion ridiculous. Or, because this cruise was predominantly booked out by black South Africans, perhaps he was talking about the better job prospects for blacks in the new South Africa. Who knows?

Johnny Clegg’s Asimbonanga was a popular choice among the disc jockeys, who started off their sets with the song to raised fists high in the air.

Performer Zakes Bantwini made mention of Mandela’s death during his short set on the first night, paying his respects.

Later on just before midnight, Mafikizolo played to an audience that was drenched in rain as the skies opened up.

The jovial party mood could not be extinguished, echoing the sentiment evident in Parliament and elsewhere that, indeed, the show must go on. They, too, made mention of Mandela in between songs.

Yet nobody really took a moment to digest the news at that early stage. With every news channel focused on Madiba’s death, passengers on the vessel had to see what was going on while recovering from their hangovers. Aside from the rich biographical material available, the most important news that emerged from that weekend was the day of the memorial service and when Mandela would be buried.

Access to the Internet on board was unreliable throughout, which meant that people had to return to their cabins for any updates – something of a shortcoming in the information age.

Instead, most chose to revel in the festive mood and face reality later. This was understandable: there is nothing “normal” about being out at sea for a few days with the problems of the world left behind, or about elderly folks recalling their youth by going on ben-ders for three nights in a row. So mourning and reflecting on the life of the former president was not something that was considered in a conventional way.

That being said, the “Codesa” dance move was very popular throughout the trip whenever a song that called for it was played.

It is apparently so named because it was created around the time of the peace talks aimed at ending apartheid.

This was perhaps the most obvious and fitting tribute to Mandela – out at sea, aboard the MSC Opera.