Other Side of the City: Hounded by hunger

When pop-ups are also pop culture, I think they should score another point. What constitutes pop culture to me? Mad Dogz. It’s a pop-up bar that does these retro hot dogs just as we imagine them from the pop iconography of mid-last century. I suspect these taste a lot better, under their retro-glam zig-zag flourish of mayo or mustard. I’m reading the list of ingredients and I am so sure no girl with flick-ups, on roller skates, delivered unto a Chevvy any hot dog with merlot-caramelised onions, fresh rocket and blue cheese sauce. 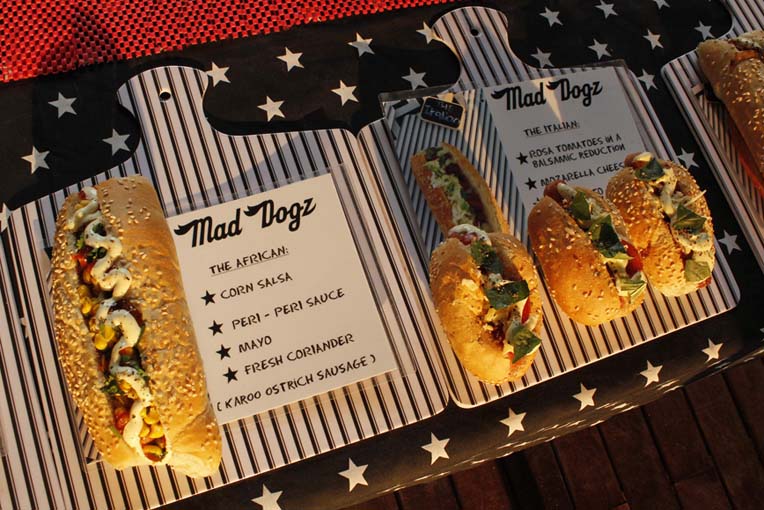 Ok, I’m holding the French dog, so to speak. There’s also an Italian, a Mexican, an American and an African. I wonder which nationality Pawel’s going to pick. A hundred eyes veer over to the stand dressed in black and white stars, judging the dogs’ purchase readiness. These sausages keep on rolling, gleamingly, on the special sizzler machine called Larry.

The Englishman. Llewellyn O’ Shea gives his sausage machine its name. With his own Welsh first and Irish second name, he might not be an Englishman after all. He’s one of us, South African for sure.

“This is a boerewors nation but I focus on the right traffic with the right product,” he says.

The midday sun. “Maboneng” even means “place of light” and we’re out in the heat of things. Mad Dogz also make pop-up sorties to The Beach in Braamfontein. The second batch of sausages is ready to become different nationalities.

“Once one person has it in the hand, they all want”, giggles Llewellyn. The Italians are winning in popularity, covered with their balsamic tomatoes, creamed basil pesto and mozzarella.

“The hungry guys want Mexican with the beans and beef-chilli.”

If I had another, it’d be the American, I consider. They’re the whole pop idea, after all. Where’s Pawel? Behind the counter with Larry and the next batch.

As we push back out from the hot throng, I lick my merlot-onion fingers.

“Which one did you have?”

“No-one geef me one”, he says, a little accusing.

Each week Marie-Lais Emond and photographer Pawel Kot scout another urban reach, tasting, testing alternative aspects to pique our curiosity about places and people we might have had no idea about.