45 000 barrels of the bourbon in a warehouse have gone up in smoke. 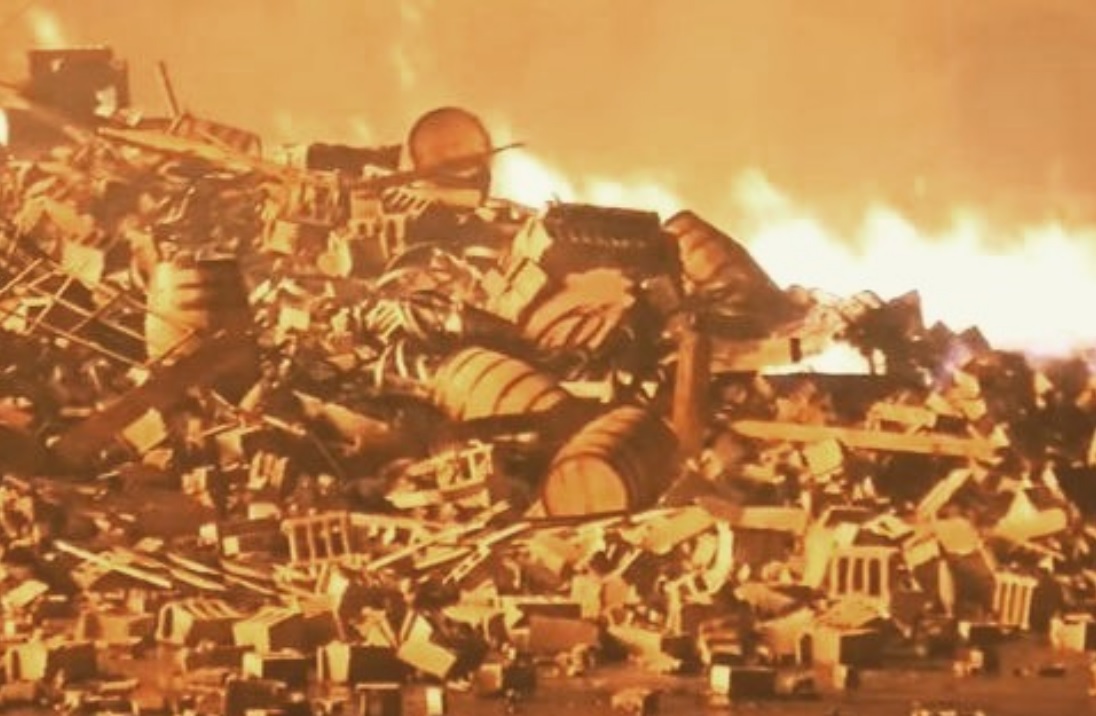 Firefighters were battling to contain a massive blaze Wednesday at a Jim Beam warehouse with 45,000 barrels of bourbon, as crews struggle to contain damaging runoff that has already begun to flow into a nearby creek and the Kentucky River.

Government officials say the runoff – a mixture of whiskey, hose water, barrel residue and charred debris – will potentially lead to a “severe fish kill” as bacteria feast on the alcohol and deplete the water’s oxygen supply.

To minimize the impact, officials have advised firefighters at the scene to not blast the flames with water, and instead let the fire burn out, said John Mura, a spokesman for the Kentucky Energy and Environment Cabinet. “Given the extreme heat of this fire, it would not do a lot to put out this fire and would simply carry the bourbon residue a lot further.”

Mura said that the distiller brought on an environmental crew to contain the spillage — reinforcing the warehouse’s surrounding berms and vacuuming up the runoff. But how much of the runoff has reached the water and the extent of the potential loss of wildlife is not yet known. The building housed more than 2.3 million gallons of bourbon, based on the number of barrels and their typical volume. The Energy and Environment Cabinet has also alerted the drinking water plant, Mura said.

Drew Chandler, the emergency management director for Woodford County, told local news station WKYT that lighting might have sparked the fire at one warehouse Tuesday night before spreading to a second storage facility. Crews managed to extinguish one, he said, but the other fire was proving more challenging.

A standard barrel contains about 200 litres of bourbon, which is aged for years to achieve its desired colour and flavour. The bourbon gives the flames ample material to burn, Chandler said. Generally, any alcohol that’s at least 80 proof – like most bourbon – is flammable.

Chandler told the Louisville Courier Journal that the fire was burning so hot he could feel the heat even standing as much as a football field away, or about 350 feet. The intense temperatures were keeping the crews from getting close enough, he said.

“We are thankful that no one was injured in this incident, and we are grateful to the courageous firefighters from multiple jurisdictions who brought the fire under control and prevented it from spreading,” Jim Beam’s parent company, Beam Suntory, said in a statement. “We have a comprehensive warehouse safety program that includes regular inspections and rigorous protocols to promote safety and the security of our ageing inventory.”

The company operates 126 barrel warehouses, which collectively hold 3.3 million barrels, in the state. The warehouse that was destroyed contained relatively young whiskey, Beam Suntory said, the loss of which will not impact availability.

A September report by the Courier Journal found that facilities where bourbon makers age their products can go without independent safety inspections for decades, raising public safety and environmental questions about an industry central to the state’s economy. The report documented a series of warehouse collapses and fires, including a lightning-sparked blaze that burned down a Jim Beam facility in 2003.

In 2010, the state adopted new structural requirements for bourbon warehouses. The rules include mandatory fire suppression systems in new facilities taller than five stories. But older warehouses are not required to update their buildings, according to the report.

In the past year, bourbon distillers have also had to contend with the economic consequences of President Trump’s trade war. U.S. whiskey exports slowed during the second half of 2018, after trading partners including the European Union enacted retaliatory tariffs of up to 25 percent, raising the cost of American-made whiskey and bourbon. Sales fell by 11 percent from July to December last year, compared with the same period in 2017, according to data compiled by the Distilled Spirits Council.