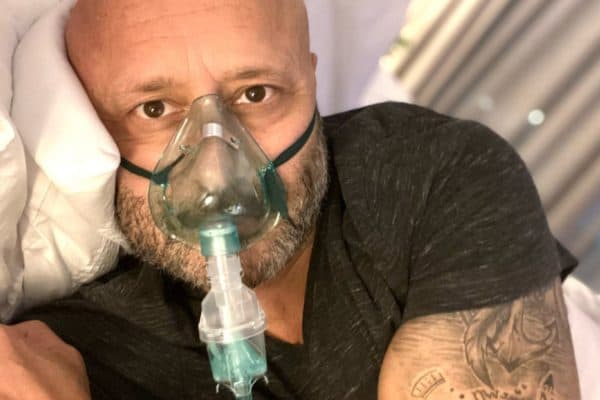 Media personality Mark Pilgrim has followed the tradition of many prominent figures by openly sharing updates about his Covid-19 journey. Picture: Twitter

Media personality Mark Pilgrim has updated fans after writing a note of encouragement to his immune system over the weekend after a recent Covid-19 diagnosis.

This comes after the radio personality announced that he had contracted the virus last Thursday saying:

“Oh dear. It got me,”  along with a picture of himself in bed.

His latest tweet reveals that he has now developed Covid pneumonia:

Hi guys. A little update on day 6. After starting to feel better, XRAYS reveal COVID pneumonia has developed in my right lung which is being treated by my doctor. Fortunately my breathing is still good and I’m able to be at home.

Here’s a little note from me.. pic.twitter.com/nHsZXnPUIt

“You’ve got this, buddy! We’ve been through a lot together over the years. You kicked cancer’s butt and also saved us after a heart attack,” read part of the note.

He went on to compare his immune system to a heavyweight boxing champ before declaring how proud of it he was.

Pilgrim shared his diagnosis on Thursday when he tweeted “Oh dear. It got me,”  along with a picture of himself in bed.

The following day, Pilgrim posted words of thanks to all those who had sent him messages of encouragement upon finding out that he had contracted Covid-19.

In the video, Pilgrim said that it was his third day of experiencing symptoms and that it was a day after he had received his test results.

“I’ve got a raging temp. At the moment, it’s about 38.9. That’s a little hot and I’m still smiling,” he exclaimed with a laugh.

“I’ve got half a pharmacy in the kitchen. I’m taking a lot of meds so thanks for all the suggestions.”

He added that he was taking controversial Covid-19 treatment Ivermectin, which is originally intended for the treatment of parasite infestations in both humans and animals.

New evidence for Ivermectin use in Covid-19, but Sahpra won’t budge

Pilgrim also expressed concern over his oxygen levels which he said were lower than normal after what he had “gone through in the past.”

“My oxygen levels are lower than normal, they only sit at about 90 percent normally so I’ve got to make sure it stays above 85.”

Day 3. A quick hi from my bed and a word of thanks for all the kind messages! #covid19 pic.twitter.com/c2F3veSS9I

He concluded by promising to keep his followers updated about his condition.