Changes to the successful city car strengthen its stand-out character in a highly competitive market segment. The new Toyota Aygo will make its world debut at the Geneva Motor Show on March 6. 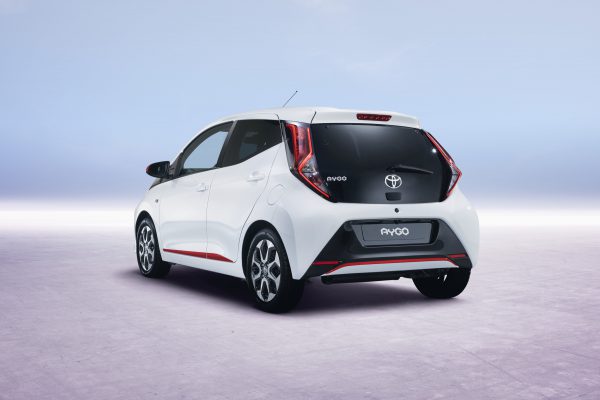 Changes to the successful city car strengthen its stand-out character in a highly competitive market segment, both in terms of a youthful and distinctive design and improved performance and handling for a fun-to-drive experience.

The frontal “X” on the new Aygo has been transformed from a two-dimensional graphic into a more powerful, three-dimensional architectural element. The distinctive new look includes redesigned headlight units with integral daytime running lights, giving the car an even more striking appearance.

The lower section of the X frames the front grille, communicating a stable stance and agile performance. Black, gloss black or silver ornamentation beneath the lights accentuates the car’s width.

When viewed in profile, there is a strong visual connection between the front and rear of the car thanks to the more pronounced frontal form and the introduction of new outer lenses for the tail lamp clusters, generating a sense of forward movement.

New LED light guides at the rear give the new Aygo a sophisticated look and help make the car instantly recognisable. The lighting signature creates the perception of a compact cabin above a wider, lower bumper area, emphasising vehicle width and stability.

Performance and driving dynamics have been improved for more agile performance around town, while maintaining Aygo’s class-leading fuel economy.

Revisions have achieved a balance of power and efficiency, with better torque delivery at lower engine speeds.