The keyless entry and passive start uses an intelligent access system that allows the driver to unlock the vehicle and start the engine without removing the key fob from their pocket or bag. Ford is making it’s sophisticated Everest seven-seater SUV more appealing and upmarket than ever, with a range of styling, suspension and feature upgrades, complemented by the introduction of the advanced new 2.0-litre Bi-Turbo and Single-Turbo engines that recently debuted on the new Ranger.

As the company’s premium offering in the rapidly growing SUV market, the new Everest puts the emphasis on quality, refinement and luxury matched to exceptional space and practicality.

Ford Motor Company of Southern Africa general manager marketing Doreen Mashinini said: “The Everest has given Ford an important foothold in the SUV segment which continues to grow in South Africa and around the world as buyers opt for versatile, family-oriented vehicles that suit their active lifestyles. 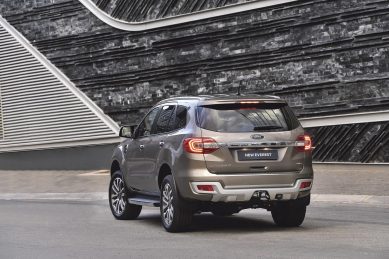 “With the Everest, we have raised the game further by introducing subtle yet effective styling updates for the eye-catching exterior, providing a more refined and luxurious cabin environment, adding several new trend-setting technologies to the already feature-packed range, and building on the outgoing model’s superb comfort and ride refinement with a revised suspension set-up.”

The maximum power output for the 2.0-litre Bi-Turbo engine is 157kW, matched to a peak torque figure of 500Nm – improvements of 10kW and 30Nm respectively compared to the existing 3.2-litre TDCi engine.

Refi nement also include low levels of noise, vibration and harshness. It is available in the Everest XLT 4×2 and 4×4 models, as well as the top-spec Everest Limited. A 2.0-litre Single-Turbo unit has also been added to the line- up, off ered in XLT 4×2 specifi ca- tion. It delivers a peak power output of 132kW, matched to 420Nm of torque with up to 340Nm available from just 1 250 r/min.

Most notably, the front-mounted stabiliser bar has been moved to the rear of the front axle, which allows for greater packaging and design freedom, along with an in- crease in diameter and stiff ness to give it improved roll control and handling performance. The revised layout also enabled a reduction in front spring rates, achieving an even more comfort- able and pliant ride. High-tech features include the passive entry and passive start (PEPS) system, fitted as standard on the XLT and Limited models.

The keyless entry and passive start uses an intelligent access system that allows the driver to unlock the vehicle and start the engine without removing the key fob from their pocket or bag.

When the key is in the vehi- cle, the driver simply presses the start/stop butt on while applying the brake pedal to start the car. Ford’s pioneering SYNC tech- nology off ers exceptional connec- tivity and multimedia options, along with intuitive voice control and ease of use.

SYNC3 with navigation is standard on the XLT and Limited models, linked to the integrated eight-inch touch-screen colour display, two USB ports and Blue- tooth connectivity.

On the outside, the refreshed grille introduces a new level of depth to the design while the low- er bumper has been redesigned to accentuate width . A classy new 20-inch wheel has been introduced on the Everest Limited .