This writer has been scribbling car stuff in The Citizen for 40 years; they said I must keep doing it until I get it right.

In those four decades, I have come to realise certain things. For one, I’m not the hotshot driver I believed myself to be in the early days. No matter what I can do with cars, somebody else can do it better. I can, for instance, get around racetracks at a fair clip, but my efforts become feeble when compared with those of real race car drivers. I know all the theories about driving rapidly on dirt but still, after all the years, I find myself gobsmacked when witnessing real rally drivers in action. 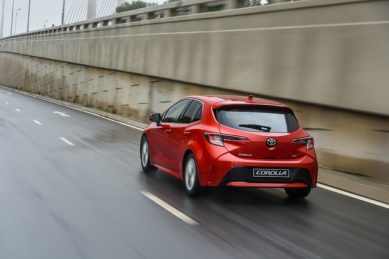 I can drive a test vehicle for a week and form an opinion about it, but that pales into insignificance when a real road tester like our Mark Jones puts it through its paces against the clock at a proper test facility. But, there is one thing I can do reasonably well. I can nurse a car to produce low fuel consumption figures. Being permanently poor, I learnt that skill many years ago and practise it diligently when driving my own, very old Mazda diesel bakkie. All of which means I get assigned a specific task with The Citizen Motoring’s long-term test vehicles. 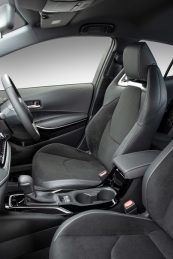 The top of the line test vehicle came with Toyota’s all-new 10-speed Sport Sequential Continuously Variable Transmission, hooked to the front wheels. As is often the case, I chose a trip between my humble home in Alberton on the East Rand and the Phakisa Raceway between Welkom and Odendaalsrust, the Free State, as the test run. Reason: it has long straights and a toll road section, where double lanes offer many easy passing opportunities.

Thus, one can cover large parts of the journey at exactly 120km/h, with the cruise control engaged, which leaves one with little to do, apart from steering the car. Thus, interior comfort, space and entertainment facilities become important.

The Hatch delivered on all counts. It is roomy inside and one gets the impression the front seating area was specifically designed around the driver. Slim, low-slung Alcantara-covered front sport seats have wide shoulder supports and solid, thick side bolsters that remind one of bucket seats without the associated discomfort.

The slim instrument panel and sporty leather-clad three-spoke steering wheel with telephone and audio controls add to the driving experience. So do air conditioning, electric windows all round, a superb audio system with six speakers, a multi-information display panel, plus Bluetooth and a 12V socket in the front.

The rear luggage compartment offers 500 litres of space, which easily swallowed my passenger’s various bags, my laptop and our food. So, off we went at the crack of dawn on Saturday, with the cruise control activated as often as possible, and one eye on the electronic economy meter display. When I got the car from Mark, the meter read 7.8l/100km.

You see, he does not believe in driving cars anything but fast. By contrast a light right foot and gentle speed changes were called for, which brings me to the part where you need nerves of steel.

What happens is this. You travel along at 120km/h on the cruise control with your feet away from the pedals until you start catching a truck slowly on a single-lane section of the road. You are loath to brake or accelerate, since that disconnects the cruise control and you will lose valuable travel distance before restoring everything to a steady 120 km/h. 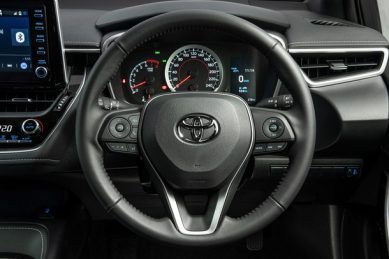 Being old and no longer brave, I generally opted to chicken out. Besides, when attempting to pass the truck on cruise control, my passenger’s screams became distracting. All of which led, to Phakisa and back, to an overall fuel usage figure of 5.9l/100km, and the Corolla’s 50l tank meant we did not have to stop for fuel during the 506 km journey. Better numbers might be possible, but that was the best I could.