It’s anything but ordinary

This Ford Performance model is fitted with an all-new 2.0-litre Bi-Turbo diesel engine that delivers a smooth 157kW of power and 500Nm of torque. Once upon a time there were three bears, Papa Bear, Mama Bear and Baby Bear, who liked porridge, and once upon a time bakkies were also mere farm implements.

Now just as you probably don’t believe in talking bears that like porridge and blondes who sleep in their beds, then you will also be bright enough to know that bakkies, especially double cabs, couldn’t be further from farm implements today.

Ford has moved this analogy even further forward now with the launch of their specialised and very rapid off-road dirt-eating Ranger Raptor. Make no mistake, the Ranger Raptor is not just a Ranger with a fancy suspension fitted and a few Ford Performance stickers added.

It is anything but ordinary. You get a newly developed and extensively modified chassis frame that has been built to withstand high-impact, off-road driving. The Ranger Raptor rides 51mm higher, 150mm wider at the front and the rear, along with 283mm of ground clearance, and a 32.5 degree approach angle and rampover and departure angles of 24 degrees. 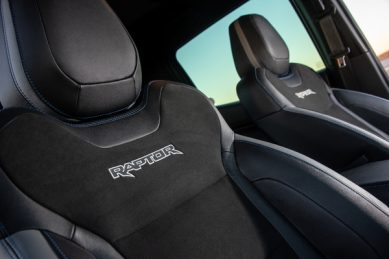 Which all combine to allow this fast dirt machine to also climb up and around anything if you so desire. Other exterior clues to the offroad performance potential come in the form of durable composite material flared front fenders designed to accommodate the long-travel Fox suspension and BF Goodrich all-terrain tyres.

The bumper not only includes LED fog lamps, it also comes with air-curtain ducts for reduced air resistance. Inside, the Ford Performance influence is also evident with very grippy, non-bakkie like suede sports seats along with elements of blue stitching plus performance oriented red needle dials all making an appearance.

And, maybe most importantly as this is a bakkie that wants to be driven as an off-road race car, you get paddle shifters and a steering wheel with perforated leather hand grip sections. Up until now this has been a #BestCarEva story and just when you think I have no constructive criticism to offer of this seriously good Ranger Raptor, here it comes.

This Ford Performance model is fitted with an all-new 2.0-litre Bi-Turbo diesel engine that delivers a smooth 157kW of power and 500Nm of torque. Doing the shifting is an all-new 10-speed automatic transmission and having 10 gears means a wider ratio-span, resulting in claimed better acceleration and responsiveness in all driving conditions, matched to improved fuel efficiency. 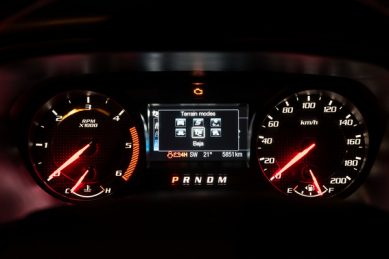 But seldom does the word efficiency go all that well with the word performance and I couldn’t help but feel this engine just didn’t offer enough real urge. On dirt, the Ranger Raptor might be hard to beat, but onroad,

I think other bakkie owners are going to be queuing up to put one over the most high-performance South African Ranger yet. I can just see the Ford marketing team starting to roll their eyes ever more and more as I continue down this road.

I know the real world is controlled by cost and scales of economy and us performance enthusiasts live in a fantasy world where too much power is just right, but it would be so nice to see this mean machine running the 201kW/420Nm, 2.3-litre four-cylinder engine from the American Ranger or even the 279kW/637Nm V6 from the F-150 to comprehensively rewrite the record books and destroy everything in front of it in the double cab segment.

Anyway, back to reality. The Raptor, comes with its own Terrain Management System (TMS), that includes a go play Baja (pronounced baahaa) mode which was inspired by Mexico’s famous Baja Desert Rally. You also get the rest of the full range of drive modes including Normal, Sport, Grass/Gravel/ Snow, Mud/Sand and Rock to take care of anything else you could want at a push of a steering wheel button.

The Ford Ranger Raptor is said to be available in limited numbers to start with and many of them have been spoken for already, so you better get inline if you want one at R786 400.