Having set the lap record at a number of racetracks including the Nürburgring Nordschleife shortly after debuting two years ago, Jaguar has now unveiled a toned down version of the XE SV Project 8 known as the Touring. Limited to just 15 units as opposed to the regular Project 8’s 300, the Touring does without its sibling’s adjustable carbon fibre rear wing in favour of a fixed rear spoiler similar to the standard XE.

While still powered by a 5.0-litre supercharged V8 that produces 441kW/700Nm linked to an eight-speed automatic gearbox, the Touring’s smaller spoiler has resulted in a reduction in performance with top speed now limited to 300 km/h instead of 322 km/h, though 0-100 km/h still takes 3.7 seconds. 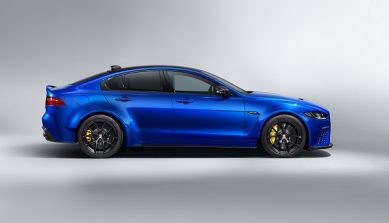