Some six months after unveiling the flagship Figo Titanium, Ford has revealed a special edition version of its entry-level model, the limited-run Figo Blu. Unveiled in India last month, the Blu is based on the mid-range Trend model and in hatchback guise only with unique exterior touches consisting of black 15-inch multi-spoke alloy wheels, a black mesh grille, contrasting roof finished in black with a choice of three body colours; Oxford White, Smoke Grey and Moondust Silver, black mirror caps, blue fog light surrounds and black graphics at the base of the doors. Inside, the special touches are less dramatic and include gloss blue inserts, a leather wrapped steering wheel and gear lever gaiter with blue stitching, and Figo Blu embroidered floor mats.

No changes have however taken place in the spec department or indeed underneath the bonnet, where the 1.5-litre three-cylinder Dragon petrol engine again punches out 88kW/150Nm, with drive going to the front wheels via a five-speed manual gearbox. 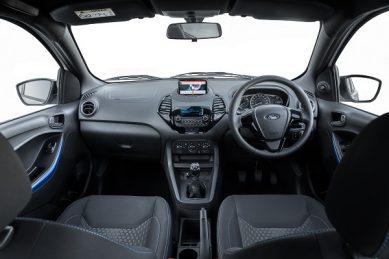