One of the already increasing number of debutants set for the Frankfurt Motor Show in September, Audi has taken the wraps off of the updated Q7 set to go on sale in Europe soon after. Joining the Q3 and Q8, the Q7 now gains the six-slat Singleframe grille as the most prominent exterior change, though additional aesthetic changes includes new headlights with optional Matrix LED or Laserlights, new side air inlets, a chrome strip running across the width of the bootlid and newly designed taillights.

Inside, the Q7’s interior is all new with the same design and layout as the Q8, highlighted by the dual screens with the top mounted MMI infotainment unit measuring 10.1-inches and the lower climate control setup 8.6-inches. Standard is the 12.3-inch Virtual Cockpit Display instrument cluster with a new Heads-Up Display being optional. 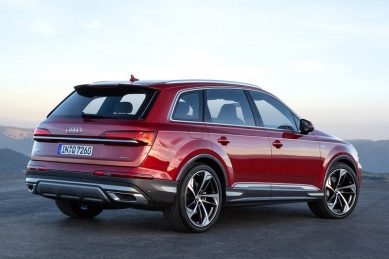 Again available with up to seven-seats and offering between 865 to 2 050-litres of boot space, the Q7 comes equipped as standard with quad-zone climate control, a 3D Bang & Olufsen sound system, automatic soft closing doors and a fragrance ioniser, while the S line pack adds sports seats featuring heating, cooling and massaging functions.

In terms of safety, the Q7’s upgraded features consists of the newly titled Adaptive Cruise Assist suite of tech made up of Active Lane Assist, Adaptive Speed Assist, Traffic Jam Assist and Efficiency Assist that brakes and accelerates automatically depending on prevailing conditions.

While still based on the MLB Evo platform shared with the Q8, Bentley Bentayga, Lamborghini Urus, Porsche Cayenne and Volkswagen Touareg, the Q7’s under-the-skin changes includes a new active roll stabilisation system from the options list, as well as optional four-wheel-steering and Adaptive Air Suspension. 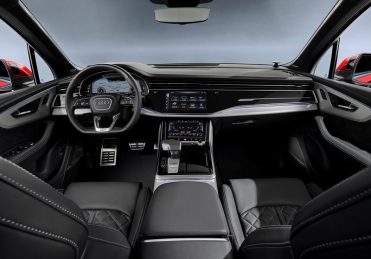 As with the Q8, Audi has branched its mild-hybrid system out to the Q7 in the form of a belt-driven alternator/starter that powers a 48-volt lithium-ion battery pack claimed to recuperate and store as much as eight kilowatts.

Somewhat oddly, no details regarding the actual engines were announced with Audi merely stating that the Q7 will initially be offered with a choice of two turbodiesel engines, and later a turbocharged petrol as well as a plug-in hybrid.

Expect however the stalwart 3.0 TDI developing either 170 kW or 210 kW to head up the oil-burning options, while the 3.0 TFSI that outputs 250 kW will serve as the petrol option with an eight-speed Tiptronic gearbox being standard on all models.

Sales of the Q7 will likely commence next year although expect price and spec to be announced closer to the local launch date.