Back in the day, there was a joke about those distinctive purple three-door Opel Corsas. It went like this: Why are purple Corsas not allowed in the Kruger National Park? Because they make the tortoises ... oh wait, this is a family newspaper, so let’s just say the answer rhymes with dandy. So it was a bit of a let-down when the Corsa 120Y Special Edition delivered to us on test was white. But a much bigger disappointment still was the discovery that there was, in fact, very little to differentiate this model from the Corsa Enjoy 1.0T Manual it is based on.

At a price tag of R259 900 – R10 000 more than the Enjoy – all you get extra are ultrasonic front and rear-park assist, rear-view camera and a few cosmetic tweaks, like velour floor mats with an embroidered 120Y logo.

If you did not know it already, Opel is celebrating 120 years in the vehicle industry this year and this Corsa is meant to celebrate the milestone. In my humble opinion, the German manufacturer did not pimp this model out enough to do this incredible anniversary justice.

How many manufacturers can say they’ve been around for that amount of time? So why not celebrate this with a strong statement? I understand that the Corsa line-up is headed by the GSi at over R100 000 more, but Opel could have at least given the 120Y its own flashy colour and styling, especially taking into account that the existing shape has been around locally since early 2015 and can do with something standing out from the crowd. 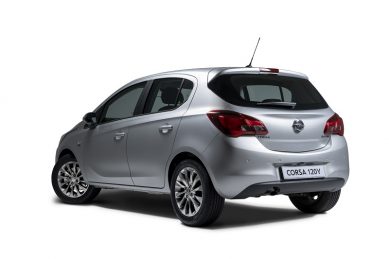 Take nothing away from the ride. The Corsa 120Y is quite an enjoyable little car, sticking to its rich heritage which has seen 1.35 million units sold worldwide since 1982.

Being very light on its wheels – almost too light when you pull away with a heavy foot – it handles extremely easily and is ridiculously easy to park, even without the generous inclusion of the sensors and a camera.

The nippy three-cylinder 999c engine produces 66kW/130Nm which goes to the front wheels through a six-speed manual gearbox. As expected, the 120Y is fuel efficient. Over the course of our week with the car, we managed close to 6.0l/100km, not all that far off the mark from Opel’s claim of 5.6l/100km in the urban cycle.

All in all the Corsa 120Y is a solid little car offering good value for money. Pity they don’t come in purple.