After countless pre-production online spy images, a lengthy teaser campaign and more recently, the revealing of its engine and accompanying details, Mercedes-AMG finally unveiled the all-new A45 and its sedan offshoot, the CLA 45, on the eve of the Goodwood Festival of Speed in the United Kingdom this past Thursday (4 July). Showcased only in flagship S guises, the exterior differences relative to the regular A-Class and CLA are prominent with both receiving the AMG GT R derived Panamericana grille, extended door sills and wider wheel arches, model specific five-spoke, 19-inch Tantalum Grey high-sheen alloy wheels, a new front splitter, the so-called jet wing front apron with louvers on the bumper, a rear diffuser, a slim carbon fibre boot spoiler in the case of the CLA and a new rear wing affixed to the A45’s bootlid.

Despite only unwrapping the S, Mercedes-AMG has also confirmed styling tweaks for the standard A45 and CLA 45, though these models ride on 10-spoke, 18-inch Tantalum Grey alloys minus the high-sheen effect, and with grey AMG branded brake calipers as opposed to the S’ red, six-piston front caliper setup with black AMG lettering that forms part of the AMG Dynamic Plus pack. What’s more, the standard A45 and CLA 45 also comes with a dual exhausts as opposed to the S’ quad setup.

Both variants can be optionally decked-out in the Night Package however that mainly adds a gloss black to finish to the side skirts, splitter and diffuser, or the Silver Chrome Pack that adds a silver chrome hue to the mentioned trim pieces. 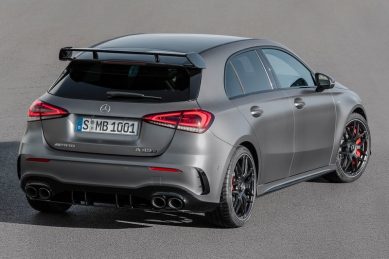 Boasting an extensively reinforced the bodyshell, the A45 and CLA 45’s revisions underneath their respective skins are more extensive with the inclusion of a strut tower brace between the front suspension struts, diagonal struts at the front and rear of the underbody claimed to improve rigidity, a so-called shearing plate made out of lightweight aluminium positioned below the engine, an AMG specific suspension with  McPherson struts at the front and a four-link design at the rear, and aluminium wishbones.

Debuting on the 45 range, the aforementioned 4Matic+ system sports what Benz refers to as Torque Control which effectively does away with the rear differential in favour of a twin-clutch setup connected to the rear driveshaft, which, according to AMG, not only distributes torque evenly between the front and rear axles, but also selectively between the left and right rear wheels depending on the mode selected. 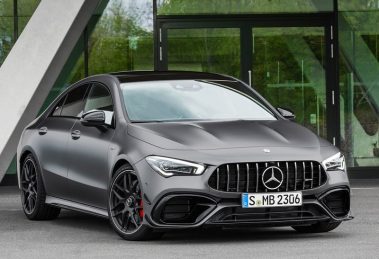 As for the interior, both the A45 and CLA 45 builds on those of their siblings including not only the 10.25-inch MBUX infotainment system with AMG bespoke graphics and three background styles for the 12.3-inch digital instrument cluster; Classic, Sport and Supersport, but also sport seats trimmed in black Artico man-made leather with Dinamica micro-fibres and double-top red stitching, red designo seatbelts, the AMG Performance steering wheel finished in Nappa leather and with black, red or yellow stitching, Dinamica micro-fibres on the dashboard and red detailing.

Optional though, the material upholstery can be had in Neva Grey/Black with Artico and with double grey top stitching as well as aluminium inlays. Up front, and as indicated last month, the A45 and CLA 45 comes powered by Benz’s all-new M 139 engine still displacing 2.0-litres, albeit now Nanoslide technology, an all-aluminium crankcase and two-stage turbocharging as well as fuel injection.

Hand-built by AMG at its plant in Affalterbach, Germany and equipped with a new cooling system that also cools the pistons, the engine produces 285kW/480Nm, which rises to 310kW/500Nm in the A45 S and CLA 45 S.

Paired to the equally new, AMG optimised eight-speed dual-clutch gearbox, both the A45 and CLA 45 are limited to 250 km/h, though the S is restricted to 270 km/h, which can be had as an option on the former as part of the AMG Driver’s Package. Sales of both models are expected to commence next year in Europe with South African availability likely to start soon after.