With just under two years having passed since the standard A8 bowed in Barcelona, Audi has now officially unveiled the all-new S8 set to go on sale in Europe later this year. Returning as the flagship A8 derivative after going out of production with the D4 generation four years ago, the new D5 designated S8, like the standard A8, rides on the Volkswagen Group’s MLB Evo platform and will once again be offered in regular or long wheelbase bodystyles, which will see it measure between 5 172 mm and 5 302 mm in overall length.

Like with previous generations, the D5 S8 is again made mostly out of aluminium, although with carbon fibre and steel now forming part of the Audi Space Frame construction method in an attempt to keep weight down. 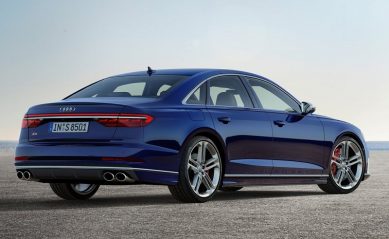 Compared to the flagship A8 L W12, the S8’s exterior enhancements are comparatively minor on first glance, and includes up to 21-inch alloy wheels, a redesigned front bumper, unique S line door sills, quad exhaust outlets, Matrix LED or Laserlight headlights with dynamic indicators, an optional black styling pack, chrome detailing and optional ventilated carbon ceramic brakes as evident by the red 10-piston calipers and upgraded 420 mm discs at the front and 470 mm at the rear.

Fitted as standard with Audi’s Dynamic all-wheel steering system, Predictive Active Suspension that works in conjunction with the standard Adaptive air suspension to limit body roll to 2.5 degrees, the five mode Audi Drive Select system with a Comfort+ setting and a sports tuned differential, the S8’s interior builds on that of the A8, but gains equally subtle touches such as dark, brushed matte aluminium inserts, a Carbon Vector 3D finished upper inlay, ventilated and massaging seats trimmed in Unikat or Valcona upholstery and a S specific take on the MMI infotainment as well as the Virtual Cockpit Display instrument cluster. 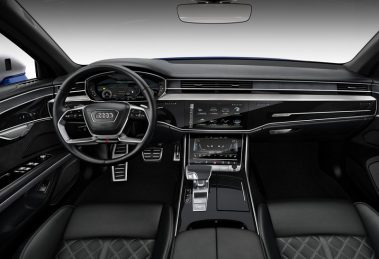 Up front, the S8 pairs the now familiar 4.0-litre bi-turbo V8 engine with a 48-volt electric motor for a mild-hybrid setup, which translates to an output of 420 kW and torque of 800 Nm, allowing the S8 to reach a limited top speed of 250 km/h. Although Audi has opted not to include any performance figures, it has revealed that all of the available twist will go to all four wheels via an eight-speed Tiptronic gearbox.

Although Audi has confirmed that the S8 will go on sale in the United States, China and South Korea in long wheelbase guise only, its local availability remains unknown given that the A8 is yet to make its South African market debut.