Mercedes-AMG has continued its rollout of new models by unveiling the 45 and 45 S version of the CLA Shooting Brake due out later this year in Europe. Following on from the A45 and CLA 45 launched some two weeks ago, the Shooting Brake also becomes the third MFA2 platform underpinned Benz to receive Affalterbach’s new M 139 2.0-litre turbocharged engine, albeit now with a station wagon-like appearance of the standard model that bowed at the Geneva Motor Show in March.

In terms of dimensions, the Shooting Brake retains the 2 789 mm wheelbase of the CLA, but gains three millimetres in height for a total of 1 442 mm, 34 mm width for a total of 1 830 mm and 269 mm in length resulting in an overall span of 4 688 mm. The switch to AMG form has however not affected the Shooting Brake’s load lugging capacity, which is once again rated at 505-litres, while the hatch itself has an opening itself of 871 mm.

Externally, the Shooting Brake is a near mirror image of the A45 and CLA 45 with the AMG bespoke touches consisting of the Panamericana grille, extended door sills and wheel arches, 18 or 19-inch AMG alloy wheels, dual exhaust outlets on the standard models and quad pipes on the S, and grey AMG branded calipers with the S receiving red stoppers utilising a six-piston caliper setup with black AMG lettering. 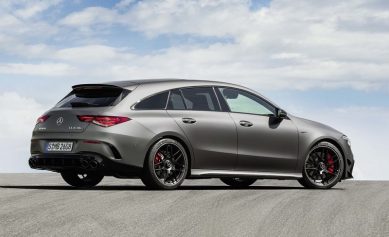 Underneath its skin, the similarities continue with the optional AMG Ride Control adaptive dampers, the Torque Control 4Matic+ all-wheel-drive system, AMG sports exhaust and the AMG Dynamic Select system that comes with six modes; Comfort, Slippery, Sport, Sport+, Individual and Race, plus the AMG Dynamic system that divides the aforementioned modes into four categories; Basic (Comfort and Slippery), Advanced (Sport), Pro (Sport+) and Master (Race), the latter, like on the A45 S and CLA 45 S, incorporating a Drift Mode.

As well as the reinforced body, the Shooting Brake’s interior has also been carried over from its AMG siblings in that the standard 45 gets Artico man-made leather sport seats with Dinamica micro-fibres and double-top red stitching, the AMG Performance steering wheel trimmed in Nappa leather with black, red or yellow stitching, Dinamica micro-fibres and red detailing on the dashboard, plus red designo seatbelts.

As mentioned, the Shooting Brake, for now, completes the trio of M 139 engined models with the forced-induced four-pot producing produces 285kW/480Nm in the standard model and 310kW/500Nm in the S. 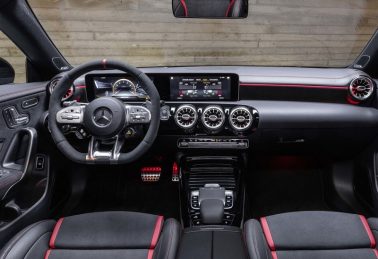 Mated to the newly developed AMG eight-speed dual-clutch gearbox, the CLA 45 Shooting Brake will accelerate from 0-100 km/h in 4.1 seconds, the same as the CLA, while the S will complete the benchmark sprint in four seconds. As ever, top speed is limited to 250 km/h, though the S comes with the optional AMG Driver’s Package that raises the limited to 270 km/h.

While no pricing has yet been announced, and despite Mercedes-AMG having confirmed both the A45 and CLA 45 for South Africa, don’t expect the CLA 45 Shooting Brake to be added to the local model line-up anytime soon.