Extensively updated Audi A4 bows along with diesel powered S4

Having updated the A4 with a minor facelift just over a year ago, Audi has now afforded its core selling sedan and Avant estate with a more extensive rounds of revisions, including a switch from petrol to diesel power for the S4. 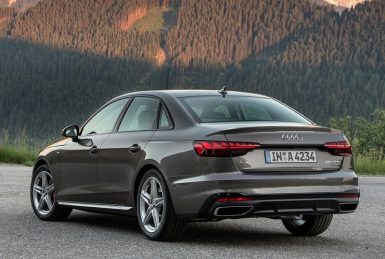 On the external front, the A4 now incorporates styling from the all-new A1 in the form of a wider Singleframe grille, LED headlights with Matrix LEDs on flagship models, a redesigned lower air intake, dual exhaust outlets and a faux rear diffuser, restyled taillights and in the case of the Avant, standard roof rails and a new aluminium tailgate.

The styling updates are also carried over to the Avant-based allroad which adds grey cladding around the wheels, at the base of the doors and bumpers, optional silver door sill inlays, satin silver underbody protection panels and a matte black diffuser.

Unlike the Avant though, the allroad has had its dimensions tweaked with a 35 mm increase in ground clearance and a wider track, the front being six millimetres broader and the rear 11 mm. Standard wheels are 17-inch alloys with 19-inch Audi Sport wheels optional. 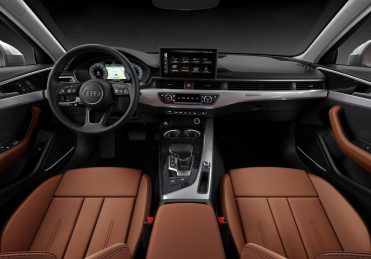 With the mentioned measurement resulting in a 24 mm increase in length and five millimetres in width with the wheelbase and height continuing as is, the interior updates are less extensive, though debuting is the 10.1-inch MMI infotainment display with the optional navigation plus system, the 12.3-inch Virtual Cockpit Display instrument cluster, Heads-Up Display and an optional 19-speaker, 705-watt 3D Bang & Olufsen sound system.

Like the exterior, the interior also comes with the basic, Design Selection and S line trims, each bringing their own assortment of materials ranging from fabric to leather and Nappa leather, to specific decorative inserts such as aluminium, brushed aluminium, carbon and wood.

In terms of space, the sedan offers a boot capacity of 460-litres, while in the Avant, space ranges from 495-litres to 1 495-litres with the rear seats folded down. The wagon also adds an optional electric tow bar and an electric luggage cover. Moving one up, the City adds Lane Change Warning, Rear Cross Traffic Alert, Park Exit Warning and a reverse camera, while the Park gets a 360 degree camera system and Parking Assist.

In-line with the current mild-hybrid focus, the A4’s range of engines all come with a 48-volt battery system driven by a belt alternator/starter that can recoup and restore as much five kilowatts and improve consumption by a claimed 0.3 L/100 km. 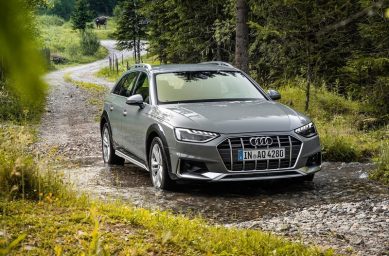 On the 35, transmission options consist of a five-speed manual or optional seven-speed S tronic, although the rest of the range is equipped with the latter. Apart from 45 that comes as standard with quattro all-wheel-drive, the rest of the petrol models are front-wheel driven. Capping the diesel range off, the 3.0 TDI carries the 45 badge and produces 170kW/500Nm. With the exception of this engine that sends its power to all four wheels via the eight-speed Tiptronic ‘box, the remaining models employ the S tronic with drive going to the front wheels only. On the allroad, only the 45 TFSI will be offered with the TDI following later.

No local launch date has yet been revealed, but expect only the sedan to arrive in South Africa either later this year or in early 2020. Building on the styling updates of its regular siblings, the S4’s sportier attributes comes courtesy of the same slit underneath the bonnet A1, standard LED lights with dynamic indicators, an integrated boot spoiler on the sedan, a matte dark chrome diffuser with silver inserts, quad exhaust outlets, silver detailing and faux aluminium roof rails on the Avant. Riding on 18-inch alloy wheels as standard with 19-inches optional, the S4’s tweaks underneath its attire consists of upgraded brakes finished in black or optionally in red utilising a six-piston, S branded caliper setup at the front with the vented discs measuring 375 mm, a self-locking centre differential and the S sport suspension as standard with the Audi damper control being optional.

As alluded to earlier, the S4 does away with the 3.0 TFSI turbocharged petrol engine in favour of the same 3.0 TDI as the standard A4 45 TDI, albeit with power lifted to 255kW/700Nm. While still equipped with the mild-hybrid system, the S4’s unit has been upgraded and can recuperate as much as eight kilowatts with the turbocharger getting an electric compressor that produces seven kilowatts while spinning at 65 000 rpm. 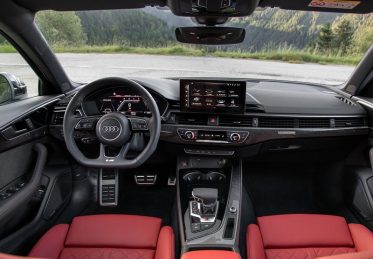 In terms of performance, both the sedan and Avant are limited to 250 km/h with the former taking 4.8 seconds to reach 100 km/h from standstill and the latter 4.9 seconds. As to be expected, S4 sends its power to all four wheels via the eight-speed Tiptronic ‘box. Outside Europe though, the S4 will remain petrol powered with the carry over 3.0 TFSI motor producing 260kW/500Nm, enough to blast the sedan from 0-100 km/h in 4.7 seconds and the Avant in 4.9 seconds with both being limited to 250 km/h. The drivetrain is unchanged from the TDI. In its home market, pricing for the S4 TDI in sedan guise kicks-off at €62 600 (R978 751). As indicated though, expect the petrol-powered S4 in sedan form only to become available in South Africa.