In what is likely to be the final hurrah for the Volkswagen Group’s flagship V8 turbodiesel engine, Audi has slotted the bent-eight oil burner into the recently updated Q7 to create the revised SQ7. Riding as standard on five-spoke, 20-inch alloy wheels, the SQ7’s has also undergone a series of tweaks underneath its skin, namely the standard fitment of Audi’s all-wheel steering system, sports-tuned air suspension with the electro-mechanical active roll stabilisation system optional, sports differential and uprated brakes with the discs at the front measuring 400 mm and those at the rear 370 mm. 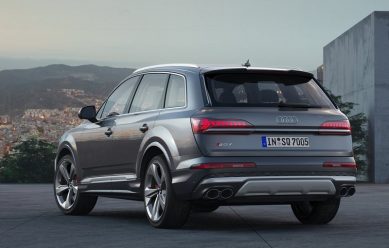 A further option though are 20-inch carbon ceramic stoppers whose discs measure 420 mm and 370 mm respectively, as well as the choice of having the calipers painted red as opposed to the regular black.

Being the flagship model within the Q7 line-up, the SQ7’s interior differences includes a dark/Alcantara finish, optional sport seats trimmed in black, Rotor Grey or Arras Red Valcona leather with S branded headrests and a massaging function, illuminated S branded door sills, stainless pedals and also from the options list, an ambient lighting package with up to 30 colours. The SQ7’s main talking point though is its engine shared with the Volkswagen Touareg V8 TDI and the recently discontinued Bentley Bentayga Diesel. Equipped with two turbochargers and the 48-volt mild-hybrid system, the 4.0-litre TDI produces 320kW/900Nm, resulting in the SQ7 blasting from 0-100 km/h in 4.8 seconds and on to a limited top speed of 250 km/h. As before, drive is routed to all four wheels via an eight-speed Tiptronic gearbox.

In Germany where the order book has been open since the beginning of the month, the seven-seat only SQ7 carries a sticker price of €96 420 (R1 499 848) with delivers set to start at the end of September. No word on local availability has been made.