Having started its coupe-styled SUV onslaught with the Q8 last year, Audi has now branched-out to the segment’s lower echelons with the all-new Q3 Sportback. Originally set to have worn the Q4 moniker, the Sportback is aimed directly at the BMW X2 and incoming Mercedes-Benz GLA, and despite retaining the same design all the way to the C-pillar as the standard Q3, is longer in overall length by measuring 4.50 m as opposed to 4.48 m.

As mentioned, the most prominent exterior change is from the C-pillar back with a larger rear overhang, flat D-pillar, sloping roofline with an integrated boot spoiler, a restyled rear bumper incorporating a faux diffuser, curved rear window and black cladding around the wheel arches and door sills. 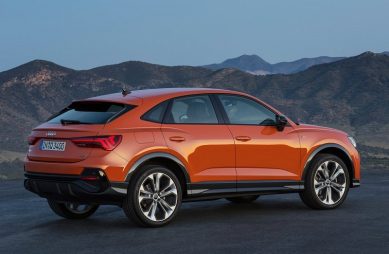 Unlike the exterior, the Sportback’s interior is virtually unchanged from its sibling with the 10.25-inch Virtual Cockpit Display instrument cluster being standard, while optional extras includes the bigger 12.3-inch display, the 10.1-inch MMI Navigation plus infotainment system and a 3D Bang & Olufsen sound system.

In Europe, the Sportback will go on sale with a choice of two 48-volt mild-hybrid engines; the petrol-powered 45 TFSI whose 2.0-litre motor produces 169kW/350Nm, and the diesel engine 35 TDI that utilises the same sized engine, albeit with outputs of 110kW/340Nm. 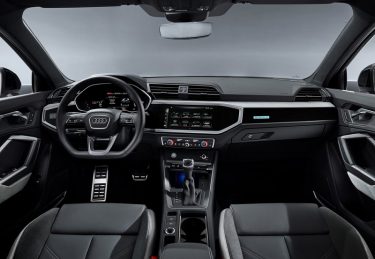 Despite both being teamed to a seven-speed S tronic gearbox, the TDI sends its power to the front wheels only with the TFSI being equipped with the quattro all-wheel-drive system as standard. More powerunits and a manual gearbox will be added at a later stage.