I’ve heard people drooling over their dream car so badly that they’ll utter “if I’m winning R2 million in the Lotto tomorrow, I’m so buying this car”. Little problem. Unless your dream car is a Toyota Corolla – which I mean no disrespect by whatsoever but which price tag isn’t two bar in any case – you’ll probably need way more than the asking price of the car to actually own it.

Whereas a Corolla is a proven benchmark for practicality all around – insurance premiums and fuel bills shouldn’t bankrupt you unless you drive like a hooligan and crash a lot – the strain your dream car will put on your wallet will differ significantly.

A R2-million price tag – and I use that figure because cars that cost that much will, sadly, never be more than most people’s dream car and is, incidentally, the price of the subject of this story – is only the beginning.

Your fuel bill will at least double as those calibre machines don’t have 1.0-litre three-cylinder engines, your insurance premiums will quadruple times seven because not only will you be a hijack risk, your insurer won’t take kindly to a panel beater’s bill for a fender-bender, and then you’ll need high-end sunglasses and a few flashy brand-name garments in order to convince the person you are trying to impress that you didn’t in fact steal the car. Enter the BMW M850i Convertible I was blessed to have as a house guest for a week. It is the German premium car manufacturer’s halo model, which recently made a comeback after a 20-year hiatus. Its base price is R1 994 300 and, with emissions tax and optional extras, our test unit totalled all of R2 139 059, so it fits the bill for my argument perfectly.

Sporting a 4.4-litre twin-turbo V8 powerplant married to an eight-speed Steptronic gearbox, producing a stupendous 390kW of power and 750Nm of torque, it is every bit as fast as it sounds.

Road test editor Mark Jones tested it’s sibling, the M850i coupe and clocked a time of 3.99 seconds from 0-100km/h. With the convertible weighing in at 50kg more at 2 015kg, expect that time to go up by a fraction or two to just over 4sec, which is quick in anybody’s language.

While the powerplant’s V8 roar is thrillingly intoxicating, the car is a head-turner, especially with the top down, the interior is every bit as premium as you’d expect and the car handles like a dream, thanks to the xDrive system and low centre of gravity, a trusty Corolla is still handles the practicalities of a daily life much better. 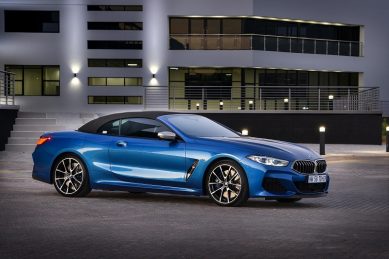 It is easier to climb into and out of, the rear passengers will have breathing space, it will comfortably swallow the children’s school suitcases and bags, it will be easier to manoeuvre around parking lots without worrying about damaging the front bumper and it will guzzle far less petrol when stuck in traffic.

To add insult to injury, the Corolla will get your golf bag to the course – the M850i won’t, as the space the convertible roof’s loading box takes away from the boot which makes loading something with the dimensions of a golf bag impossible. But – and this is the whole purpose of my argument – a person who owns a M850i Convertible isn’t going to expect to load their golf bags, unload them and drag them along for 18 holes.

Someone who is not reliant on striking it rich in the Lotto to buy this car is supposed to belong to the kind of golf club where a bag is kept for him in his personal locker, a valet parks his car and a regular caddie awaits him with his freshly cleaned clubs and polished shoes.

The M850i will, in all likelihood, also be the second car – a toy – with a luxury sedan or premium SUV tasked with the daily chores. That means another bar or two for another set of wheels with big monthly instalments, thirsty habits and lofty insurance premiums. And when someone can afford all that, together with a real big house and two pedigreed huskies patrolling the generously size lawn, the M850i almost becomes a must-have. After you have worked hard, you take the top down and play hard – something this classy BMW is only too generous to assist you with. Then the 16.7l/100km wouldn’t bother you in the least. Nor would the lack of space in the rear.

It was built as a gentleman’s racer – with bucket loads of style – and that is exactly what the owner will use it for. Should he/she finally get tired of the roar under the hood, the superb Bowers & Wilkins Diamond surround sounds our unit had fitted as an optional extra at R54 500 should entice the lucky devil behind the wheel.

That is why a machine like this is a dream car in the true sense of the word. Even if you have acquired the car by hook or by crook, the dream is far from complete … unless you marry into some European royal family or the Guptas.