With its footprint in South Africa continuing to grow, the luxury division of Chinese automaker Great Wall Motors (GWM), Haval sprung a surprise by unveiling the facelift H2 at the Kyalami Festival of Motoring this past Wednesday (21 August). The best-selling model in the Baoding based marque’s line-up with a reported 700 000 units sold globally since its introduction in 2016, the updates applied to the H2 are extensive in the form of a redesigned front bumper and fenders, restyled headlights with daytime running LEDs, a new hexagonal grille, revised rear bumper taillights, a chrome central bootlid strip, new five-spoke 18-inch alloy wheels, chrome faux diffuser and chrome tipped dual exhaust outlets. 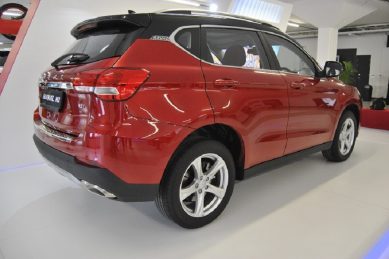 Inside, the H2 gains upgraded materials, a new gear lever for automatic models and a standard sunroof across the range with a panoramic roof being available on the flagship Luxury.

In terms of range, the H2 is again split into two trim levels; City and Luxury with equipment levels being unchanged from the pre-facelift model. The same applies to the drivetrain where the 1.5-litre turbocharged petrol engine produces 105kW/202Nm, and can be paired to a six-speed manual gearbox or a six-speed automatic. As before, drive is directed to the front wheels only. Somewhat surprisingly, no prices were revealed.