Lamborghini has unveiled its first ever hybrid production supercar set to debut at the Frankfurt Motor Show next week.

Dubbed a ‘hybrid super sports car’ by the Sant’Agata automaker, the Sián also rates as the Raging Bull’s most powerful model ever made with its normally aspirated 6.5-litre V12 engine taken from the Aventador SVJ being teamed to a 25 kW 48-volt electric motor housed within the seven-speed Independent Shift Rod transmission for a total system output of 602 kW. 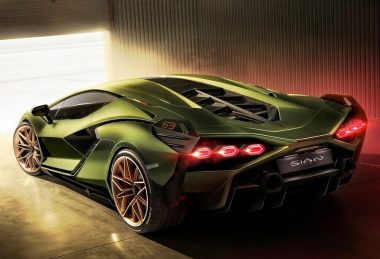 In a departure from conventional mild-hybrid setups though, the Sián eschews the lithium-ion battery pack for a supercapacitor which, together with the electric motor, weighs in at 34 kg and allows for a top speed of “over 350 km/h” and 0-100 km/h in 2.8 seconds.

Accordingly, the Sián also boasts an in-house developed regenerative braking system that recuperates and stores energy otherwise lost during braking, and which is then released as a power boost function at speeds up to 130 km/h, resulting in it accelerating from 70 km/h to 120 km/h 1.2 seconds faster than the Aventador SVJ. With design inspiration said to have come from the iconic Countach, the Sián will be limited to 63 units only and come individually specified by each owner through Lamborghini’s Ad Personam personalisation programme.