One of the most controversial models unveiled at the Frankfurt Motor Show, BMW provided a glimpse of what to expect from the imminent 4 Series by removing the covers off of the Concept 4 coupe on Tuesday (10 September).

Said to pay homage to the iconic 328 from the 1930s and the 3.0 CSi from the 1970s, the Concept 4 rides on 21-inch, five-spoke light alloy wheels and sports the slimmest iteration yet of BMW’s LED equipped headlights, while the front bumper comes with prominent air vents with gloss black trim. 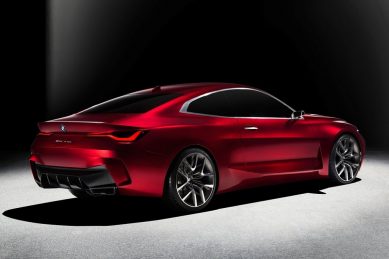 Finished in a colour called Forbidden Red which BMW claims “accentuates the car’s surfaces vividly”, the Concept 4’s most controversial design element however comes in the form of the kidney grilles, now bigger and wider than those of the X7.

According to BMW Head of Design, Domagoj Dukec, the Concept 4 “presents a confident and classy take on this iconic feature” the Munich also claiming that the grille “fits seamlessly into both the proportions of the front end”.

No technical details or indeed images of the interior were revealed, but expect both to mirror those of the 3 Series when the production model goes on sale next year.