Following the recent online leak of the heavily updated Renault Kwid in India, market leader Maruti Suzuki has officially released details and a teaser video of its direct rival, the new S-Presso, ahead of its launch next week (30 September).

Styled along the lines of the Mahindra KUV 100 NXT and indeed its Renault’s rival with the front-end bearing similarities to the previous Jimny, the boxy S-Presso is an effective production version of the Future S concept that bowed at the Delhi Auto Expo last year, and aside from its exterior, comes with a newly designed, bespoke interior. 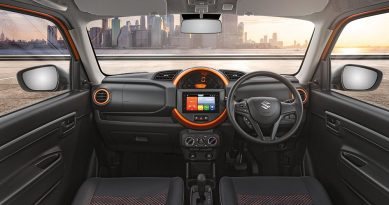 Based on the same Heartect platform as the Swift and measuring 3 665 mm in overall length with a wheelbase of 2 380 mm, height of 1 549 mm with the latter wheel option and 1 564 mm with the former and width of 1 520 mm, the S-Presso will be offered in a choice of nine derivatives; STD, LXI, LXI (O), VXI, VXI (O), VXI+, VXI AGS, VXI (O) AGS and VXI+ AGS, all powered by a 1.0-litre three-cylinder petrol engine that produces 50kW/90Nm. Standard on all is a five-speed manual gearbox with a five-speed automated manual (AMT) optional on the VXI, VXI (O) and the VXI+.