Nissan Australia has reportedly not given up on pushing for a right-hand-drive version of the Titan pick-up after the model’s mild facelift earlier this month.

The topic of much speculation admits a series of claims dating back to last year, the Japanese automaker’s Managing Director for Australia, Stephen Lester, who last year stated that “we are going to keep working and fighting on this”, told caradvice.com.au that “a lot of productive meetings” had taken place with Nissan Japan, but that noting has yet been stamped.

“There is no shortage of work that we’re constantly doing to try to convince the powers that be that we’ve got an opportunity. We have got an incredible amount of capability here in the local Australian market, let’s get behind it and do it ourselves,” Lester said of the local conversion process.

“There is certainly opportunity to do that. I would like to think that as this (top end Navara) has come to life now, it strengthens our case in a demonstrable way of being able to say … ‘here’s what we can do’”.

Initially, it was reported in July that Nissan had been approaching a local engineering firm in Melbourne for the conversion that will see the Titan rival the Ram and Chevrolet Silverado that are both converted by Walkinshaw Automotive, and sold under the Holden Special Vehicles (HSV) and American Special Vehicles banners (ASV) with full-backing  from General Motors and Fiat-Chrysler Automobiles.

“There are two ways to look at it. Trying to get the factory to agree to do right-hand-drive… and there’s another (option) that would suggest, well you’re converting left-hand-drive vehicles anyway in Australia, how could we do that?,” Lester said.

He also stated that the removal of the Cummins V8 turbodiesel engine from the Titan in North America due to poor sales is unlikely to hurt the model’s prospects for Australia, saying that, “When you look at where the real volume is in the (US pick-up) market locally, it’s still by and large petrol versions”.

“Would it be great to have the diesel Cummins in Australia? Of course, however, the reality is the petrol V8 would go perfectly well and we’ve demonstrated that with Patrol sales … we’ve still be able to grow sales in that segment”.

In the same interview, Lester also confirmed that no plans are in place to bring the seven-seat Terra to Australia due to a ‘”variety reasons”. 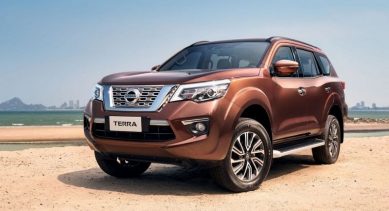 “Not being (included) on the program from the beginning is proving very difficult for us to cover off any investment. The markets where Terra does exist today are very different from our market and therefore there are also some existing challenges (than) simply… importing them,” he said.

In November, Nissan Australia Corporate Communications General Manager, Karla Leech, told the online platform that the Terra, which rides on the same platform as the Navara and is aimed at the Toyota Fortuner, Ford Everest, Mitsubishi Pajero Sport and Isuzu MU-X, is being investigated for introduction, but that no final decision has been made.

Unveiled in the Philippines last May, the Terra, in that market, comes powered by the old 140kW/450Nm 2.5-litre YD25DDTI turbodiesel engine that powered the previous generation Navara and Pathfinder, while in China, it utilises a normally aspirated 2.5-litre petrol that punches out 135kW/251Nm.

The Thai-market equivalent meanwhile is offered solely with the Navara’s 140kW/450Nm 2.3-litre twin-turbodiesel and seven-speed automatic gearbox, which is standard on the Chinese model and optional in the Philippines where a six-speed manual comes standard.