The standard Performance that delivers 390 kW and the Performance battery Plus that produces 420 kW. With the all-electric Taycan having been out for less than a month, Porsche has introduced a new entry-level derivative in the form of the 4S.

Slotting in below the Turbo, the 4S differentiates itself by model specific 19-inch S Aero alloy wheels, a new front apron with revised geometry, standard LED headlights and a black diffuser with the same hue featuring on the door sills. 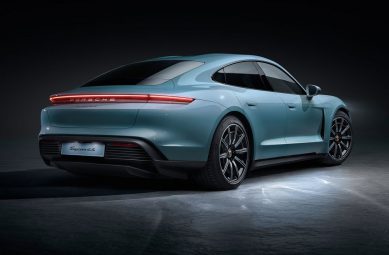 Foregoing to the Turbo and Turbo S’ leather upholstery for partial leather with the option of having this deleted entirely, the 4S retains the 10.9-inch infotainment system with an optional display for the passenger, as well as the 4D Chassis Control system, three-chamber Adaptive air suspension with electronic damper control and Porsche Active Suspension Management.

Equipped with a red painted fixed six-piston caliper setup at the front and four at the rear with the discs measuring 360 mm and 358 mm respectively, the 4S’ biggest departure over its sibling is its battery where two options are provided; the standard Performance that delivers 390 kW and the Performance battery Plus that produces 420 kW. 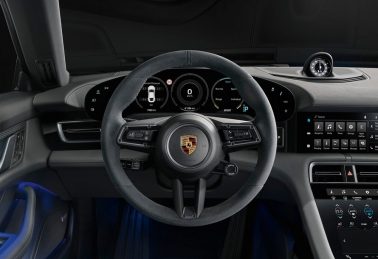 As its moniker suggests, the 4S sends its power to all four wheels via a unique two-speed transmission, with both models reaching 100 km/h from naught in four seconds and topping out at 250 km/h. In the case of the former, the single-deck 79.2 kWh battery allows for a range of 407 km/h and the double-deck 93.4 kWh unit of the latter a total of 463 km.