Range extending motor will be offered, which will be a rotary engine Mazda has made good on previous reports by revealing its first all-electric model at the Tokyo Motor Show in the shape of the MX-30.

Riding on Hiroshima’s all-new e-SkyActiv platform and incorporating the latest Kodo design language based on the principle of ‘Modern Human’, the MX-30 measures 4 395 mm in overall length with a wheelbase of 2 655 mm, both the same as the CX-30, but with a 30 mm gain in height for a total of 1 570 mm with the width unchanged at 1 795 mm.

Aesthetically however, the MX-30 boasts a coupe-style design with RX-8 inspired suicide rear doors and no B-pillar, as well as a longer bonnet to accommodate to the all-new e-SkyActiv motor which Mazda President, Akira Muramoto, has confirmed will feature on all production models by 2030. 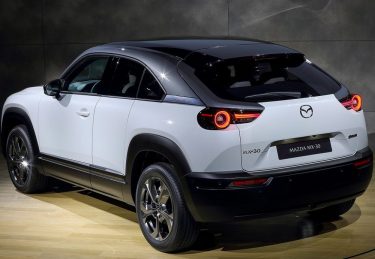 In-line with its electric drivetrain, the interior not only features new additions such as a new seven-inch touchscreen panel for the climate control similar to Audi’s latest models, but makes use of sustainable materials such as a Heritage Cork wood centre console tray sourced from trees that have not fallen, door trim panels made from recycled plastic bottles and fabrics also made from cycled materials.

Retaining the top-mounted MZD Connect infotainment display along with the rotary dial, the MX-30 also serves as Mazda’s first model aimed at an accident free future, in that it comes with safety systems under its i-Activesense banner such as Smart Brake Support with Turn-Across Traffic detection and Road Keep Assist that detects road surfaces edges and then adjusts the steering to keep the car on the road.

Although no further technical details were revealed, reports are the MX-30’s system, which until now has been tested in a CX-30 test mule, will consist out of a 35.5 kWh battery pack capable of producing 105kW/246Nm and offering a range of 200 km between trips to the plug. 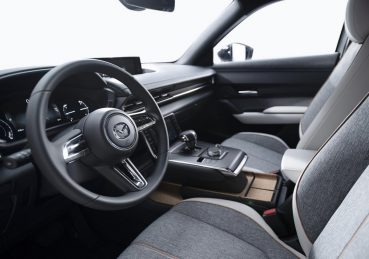 The most interesting aspect though is that a range extending motor will be offered, which, according to Best Car, will be a rotary engine that will, based on previous reports, produce 50kW/100Nm. Also included is an electric version of the G-Vectroing Control Plus system known as e-GVC Plus that uses the powertrain to send power from side to side, as well as providing a seamless feel between brake and throttle inputs.

European pre-orders for the MX-30 have already opened with delivers starting next year, but don’t expect it to arrive in South Africa anytime soon.