Trimmed product line-up will include facelift versions of the Giulia and Stelvio, a new compact SUV that will be the Tonale and a B-segment SUV. The expected merger between the PSA Group and Fiat-Chrysler Automobiles (FCA) has already resulted in the first casualties with Alfa Romeo reportedly confirming that a successor to the iconic GTV and 8C will no longer happen. 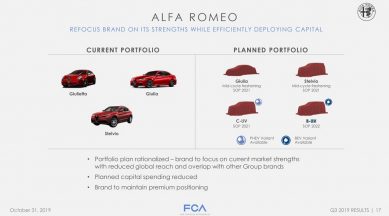 Part of the marque’s initial five-year plan tabled by late former CEO Sergio Marchionne in June last year, a series of leaked presentation documents have shown that the models in question, due in 2022 and 2023, have been axed completely along with a long wheelbase version of the Stelvio, the flagship seven-seat SUV that was rumoured to wear the Castello nameplate and the facelift version of the aging Giulietta. 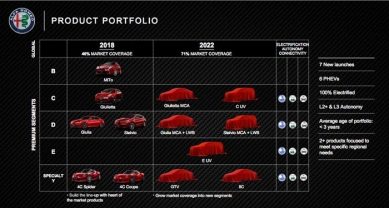 Instead, the trimmed product line-up will include facelift derivatives of the Giulia and Stelvio out in 2021, a new compact SUV also out in 2021 that will be the recently spied Tonale and a B-segment SUV slated to arrive in 2022 with an electric powertrain. 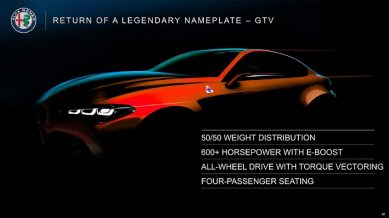 According to slides of the intended models released last year, the GTV would have been based on the Giorgio platform that underpins the Stelvio and Giulia, and use an electrified version of the 2.9-litre twin-turbocharged V6 producing around 441 kW with drive going to all four wheels. 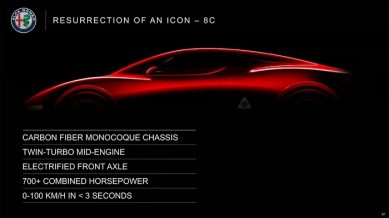 The 8C meanwhile would have utilised a carbon fibre monocoque and a mid-engine twin-turbocharged engine, likely to have been a Maserati V8, with an electric front axle that looked set to produce 522 kW and result in 0-100 km/h in less than three seconds.