This is it: BMW M2 CS officially revealed Heading for the Los Angeles Auto Show later this month, BMW, on the back of images leaked on Tuesday (5 November), has now officially divulged complete details of the M2 CS. As mentioned, the CS serves as the swansong performance variant of the F22 2 Series based M2, and slots-in above the M2 Competition as the new model flagship variant.

Riding as standard on 19-inch gold or gloss black Y-shaped alloy wheels wrapped in Michelin Pilot Sport Cup 2 tyres with the comfort orientated Pilot Super Sport rubber available as a no-cost option, the CS has also undergone a series of changes underneath its skin to differentiate it further from the M2 Competition. 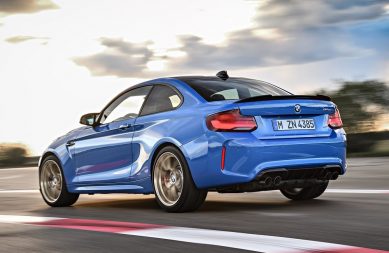 Further fitted with the Active M Differential that sports an M Dynamic Mode, stopping power has also been upgraded in the form of the M Sport braking system made up of a red-painted six-piston caliper setup at the front and four-pistons at the rear, with the discs measuring 400 mm and 380 mm respectively.

Inside, the interior boasts Alcantara trim on the dashboard, doors, gear lever and handbrake, while the centre console is made entirely out of lightweight carbon fibre with this also applying to the door pulls. The Alcantara touch also extends to the centre armrest and M Sport steering wheel, though the latter can only be had as an option. 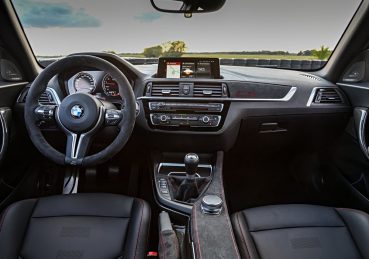 Mirroring the M4 CS are the lightweight M Sport seats trimmed in black Merino leather and Alcantara with CS badging on the headrests, while red stitching on the doors, dash, seats themselves, centre console, handbrake and gear lever rounds the interior off along with red CS stitching on the passenger’s side and M2 branded treadplates.

Up front, the CS utilises the S55 3.0-litre turbocharged straight-six engine from the M3/M4 Competition, which produces the same 331kW/550Nm delivered to the rear wheels via a standard six-speed manual or optional seven-speed M DCT transmission. While the top speed for both models is capped at 280 km/h thanks to the standard fitment of the M Driver’s Package, the manual will reach 100 km/h from standstill in 4.2 seconds and the M DCT in exactly four seconds.

Going on sale in Europe from March next year, the CS will be available in a choice of four colours; Alpine White, Hockenheim Silver Metallic, Black Sapphire Metallic and Misano Blue Metallic and carry a sticker price of €95 000 (R1 562 656) in Germany. No mentioning of it arriving in South Africa has however been made.